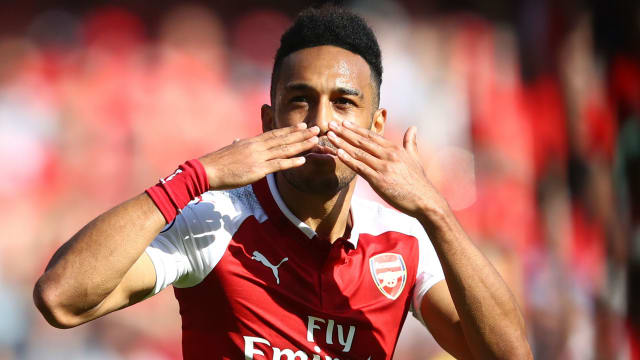 Arsene Wenger enjoyed a winning farewell in his final home game in charge as Arsenal eased to a 5-0 thumping of Burnley at Emirates Stadium.

The Frenchman, who will leave at the end of the season after nearly 22 years at the helm, saw his side seal sixth place in style, thrashing their nearest rivals in the table on Sunday.

While the midweek Europa League defeat to Atletico Madrid ended his hopes of finishing his reign with a trophy, Wenger was rightly the centre of attention in his 606th and last home fixture.

The outgoing manager was given a guard of honour prior to kick-off before witnessing his side cut loose against a Burnley side who arrived still harbouring hopes of leapfrogging their opponents.

A pair of goals from Pierre-Emerick Aubameyang - Wenger's final signing - book-ended efforts from Alexandre Lacazette, Sead Kolasinac and Alex Iwobi, as Arsenal made hay in the capital sunshine.

Only the woodwork denied them hitting half a dozen, Danny Welbeck seeing a thunderbolt kept out by the crossbar, on a day of celebration for Arsenal's longest serving manager.

The last three league meetings between the teams were settled in Arsenal's favour by winners beyond the 90th minute, but the hosts made sure there was no need for late drama in Wenger's swansong.

They went ahead in the 14th minute when Lacazette's attempt to score from a tight angle on Arsenal's right instead set up Aubameyang for an easy tap-in.

The Frenchman turned from provider to scorer for Arsenal's second, poking in a left-footed volley towards the end of a first half extended by four minutes due to a shoulder injury to Ashley Barnes.

The striker went off with his right arm in a makeshift sling following a heavy collision with Granit Xhaka and, minus both Barnes and Chris Wood, their joint top-scorers, Burnley struggled to make an impact in attack, failing to even muster an attempt at goal before half-time.

Sam Vokes did call Petr Cech into action early in the second half, though his tame header summed up an unusually lacklustre performance from Sean Dyche's otherwise impressive squad this term.

Kolasinac killed off any slim hopes of a Burnley comeback, drilling a low drive into the net after he was teed up by Jack Wilshere's pass.

A fourth followed in the 64th minute, Iwobi firing into the roof of the net just as Arsenal fans sang about Patrick Vieira, a potential candidate to replace his old boss, while Aubameyang rounded out the scoring by tapping home Hector Bellerin's low cross.