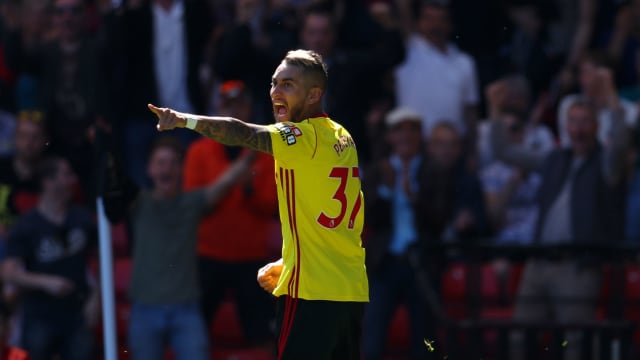 Roberto Pereyra scored one and created the other as Watford recorded a hard-fought 2-1 victory over Newcastle United, ending their poor run of seven games without a win.

Watford's struggles had seen them drawn back into the relegation equation but Saturday's success will see them playing Premier League football next season.

The Hornets had failed to score in their last three matches but took just two minutes to open break the deadlock, Pereyra tucking home after a fine move.

He then turned provider for Andre Gray to head home the hosts' second of the afternoon as the Newcastle defence parted.

Deeney should have extended their advantage from the penalty spot, but he was denied by a superb double save from Martin Dubravka.

Newcastle gave themselves hope in the second half when Ayoze Perez continued his fine run of form with a well-taken effort and Rafael Benitez's tactical changes altered the flow of the game.

Perez struck the frame of the goal as Newcastle piled on the pressure but the Magpies could not find an equaliser as they slipped to a third successive defeat.

3 - Roberto Pereyra has scored three goals in his last five Premier League games for @WatfordFC, more than he had in his previous 29 for the club (2). Form.

It took just two minutes for Watford to open the scoring as Paul Dummett saw his sloppy touch inside the area present the ball to Abdoulaye Doucoure, who tapped the ball across for Pereyra to tuck home his third goal in five games.

The hosts continued to attack the visitors and kept on-loan Newcastle goalkeeper Dubravka on his toes, forcing the Slovakia international to deny Pereyra one-one-one before diving to keep out Gray's fierce drive.

However, the Hornets doubled their advantage after 28 minutes when Pereyra showed superb skill out wide to beat his man and loft a delightful cross into the middle for Gray to head home.

Javi Gracia's side had a golden opportunity to pull out of sight after Dummett was adjudged to have fouled Gray inside the area, but Dubravka thwarted Deeney, saving his penalty and then brilliantly keeping out the rebound.

Perez hauled Newcastle back into the game 10 minutes into the second half, as Javier Manquillo found space and whipped a superb cross in for the forward, who poked home his fourth goal in his last six league matches.

Rafael Benitez's side found encouragement from that goal and came close to finding an equaliser when Adrian Mariappa, on as a substitute, deflected a cross back into the arms of Orestis Karnezis and was fortunate not to score an own goal.

Newcastle, inspired by Benitez's tactical changes, were battling for an equaliser, seeing Perez strike the post after 73 minutes after flicking on Shelvey's corner at the near post.

The hosts held firm to take all three points, though, in a result that ends their relegation fears.