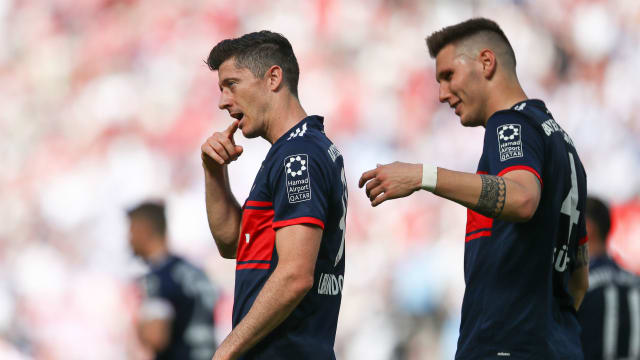 Bayern Munich coach Jupp Heynckes admits he was not amused by Robert Lewandowski's behaviour when he was substituted during the Bundesliga champions' 3-1 win over Cologne on Saturday.

The Poland striker, who scored his side's second goal, was substituted in the 77th minute for Sandro Wagner, but did not acknowledge Heynckes as he left the pitch.

Lewandowski's response earned him a few stern words from Heynckes at the time and after the game, the 72-year-old was keen to stress how unimpressed he was with his striker.

"I know myself that we goalscorers are selfish and always thinking about our goalscoring ratio," he said. "We have spoken and he has understood.

"When I took him off, though, I didn't find it funny at all, because I'm the boss and no one else.

"I never enjoyed being taken off as a striker. He wanted to score his 30th league goal. We've just spoken and it's already forgotten."

goals this #Bundesliga season... and there's one matchday left!#LewanGOALski  pic.twitter.com/JW7dDzENXu

There was nothing riding on the clash, Cologne's drop from the Bundesliga confirmed last week, while Bayern have been champions since April 7.

Cologne took the lead as Bayern made a low-tempo start despite Heynckes naming a strong team in the wake of their midweek Champions League exit to Real Madrid.

Niklas Sule was unfortunate to turn a Christian Clemens cross beyond Sven Ulreich, the defender's third own goal of the season levelling the Bundesliga record.

But Bayern improved radically after the interval, with Rafinha and Thomas Muller combining twice to set up James Rodriguez and then Lewandowski for simple close-range finishes, with Corentin Tolisso's header wrapping up the points.