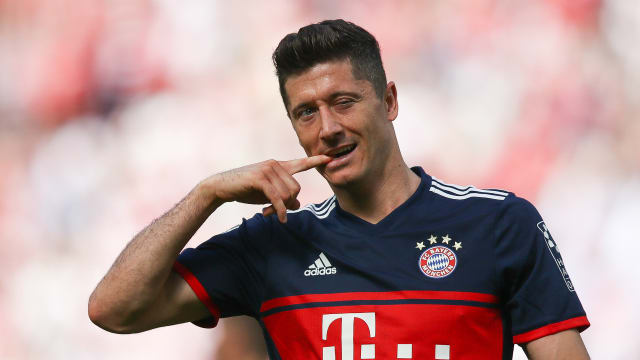 Bayern Munich came from behind with two goals in as many second-half minutes setting up a 3-1 win at relegated Cologne on Saturday.

There was nothing riding on the RheinEnergieStadion clash, Cologne's drop from the Bundesliga confirmed last week, while Bayern have been champions since April 7.

Cologne took the lead as Bayern made a low-tempo start despite Jupp Heynckes naming a strong team in the wake of their midweek Champions League exit to Real Madrid.

Niklas Sule was unfortunate to turn a Christian Clemens cross beyond Sven Ulreich, the defender's third own-goal of the season levelling the Bundesliga record.

But Bayern improved radically after the interval, with Rafinha and Thomas Muller combining twice to set up James Rodriguez and then Robert Lewandowski for simple close-range finishes, with Corentin Tolisso's header wrapping up the points.

Victory was an early birthday present for Heynckes, the veteran coach turning 73 next week, as he took charge of Bayern for an away league game for the final time, while his opposite number Stefan Ruthenbeck was dismissed late on.

and counting for @lewy_official in the #Bundesliga this season. #KOEFCBpic.twitter.com/nqYL1FFZC3

Ulreich's error cost Bayern against Madrid but the goalkeeper made an early block to deny Simon Terodde, Simon Zoller then slotting wide from a good position as Cologne started well.

With Bayern struggling to find their tempo Cologne continued to forge the clearer chances, Marcel Risse blazing over after being found by Zoller.

Lewandowski saw a point-blank header saved by Timo Horn but Cologne nudged in front in the 30th minute.

Clemens won the ball deep in Bayern territory and delivered a fine right-wing cross that Sule could only turn into his own net after Zoller got a vital touch in front of the defender.

James was Bayern's main creative threat and when he crossed for Lewandowski again, Horn made a sensational save to his left to protect his side's lead.

Horn - set to stay at hometown club Cologne despite relegation - denied Lewandowski with his legs after chaos in the Bayern box, but two goals in three minutes from the champions turned the game around.

Rafinha's left-wing cross found Muller at the back post, the Germany international nodding down for James to tap in from close range.

14 - @esmuellert_ (@FCBayernEN) has provided his 14th assist in the #Bundesliga this season, more than he has ever managed in a single campaign in the competition. Service. #KOEFCB@FCBayernUSpic.twitter.com/SRNgY4Ti0v

And the same combination set up Lewandowski to put Bayern in front, Rafinha raiding down the left again and finding Muller with a low cross, the captain holding off his marker and laying the pass off for Lewandowski to smash home.

Billy Goats coach Ruthenbeck was sent to the stands by Bibiana Steinhaus - the female referee officiating a Bayern Bundesliga game for the first time - after protesting her decision not to award a penalty for Sule appearing to drag Terodde down in the box.

And substitute Tolisso completed the comeback with a 78th-minute header from a James cross wrapping up a comfortable victory, Cologne forward Claudio Pizarro twice almost scoring from the bench in the closing minutes against his old club.