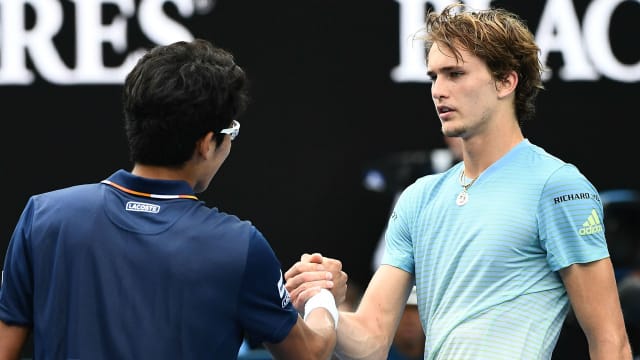 Alexander Zverev will have revenge in his sights against Hyeon Chung as the pair booked a semi-final date at the BMW Open on Friday.

World number three and defending champion Zverev trails 2-0 in the head-to-head record against his fellow up and comer, who knocked him out of this year's Australian Open.

The German comprehensively beat Jan-Lennard Struff 6-3 6-2 to reach the last four in Munich and will now look to put himself on the board against Chung, who defeated 2014 champion Martin Klizan 6-3 6-4.

"I lost to Chung in Australia in a tough five-set match. I'm looking forward to this match," Zverev said. "I felt good on court and I think he did as well. It will be an interesting match."

Defending champion Alexander Zverev notched his th victory of the 2018 season in Munich.

Philipp Kohlschreiber, a three-time winner of the tournament, ousted second seed Roberto Bautista Agut 6-4 6-4 and will face fellow German Maximilian Marterer - who saw off Marton Fucsovics in straight sets - in the last four.

Next Gen star Stefanos Tsitsipas, fresh off a run to the Barcelona Open final where he lost to Rafael Nadal, continued his fine form by coming from behind to beat Roberto Carballes Baena at the Estoril Open.

Joao Sousa stands in the way of the Greek and the final after defeating Kyle Edmund 6-3 1-6 6-0, while on the other side of the draw Frances Tiafoe will play Pablo Carreno Busta.

At the Istanbul Open, Malek Jaziri - who knocked out top seed and defending champion Marin Cilic on Thursday - came from behind to beat Jiri Vesely 3-6 6-4 6-1.

He faces Laslo Djere in the semi-finals after the Serbian beat Paolo Lorenzi in three sets, while Jeremy Chardy will play Taro Daniel, the duo winning their respective quarter-final ties with Thomas Fabbiano and Rogerio Dutra Silva.