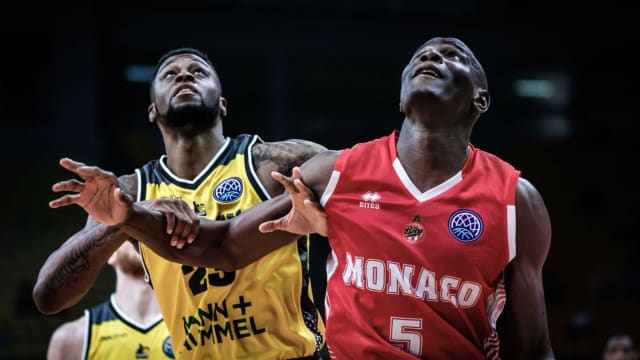 Elmedin Kikanovic and Chris Evans starred as AS Monaco booked a spot in the FIBA Basketball Champions League final despite temporarily leaving a player at the hotel, while AEK edged UCAM Murcia in Friday's other semi.

Monaco's evening started in inauspicious fashion when the team bus departed for their clash against MHP Riesen Ludwigsburg without Amara Sy, with coach Zvezdan Mitrovic joking: "Amara didn't play for three months so we're used to playing without him!"

But Mitrovic's men were at full capacity in Athens, recovering from falling behind 11 points early in the game to secure a comprehensive 87-65 victory.

Kikanovic led the way with 19 points, while Evans chalked up 17 - 15 of which came in the second half - and recorded a game-high eight rebounds.

Monaco outscored their opponents 26-11 in the final quarter, as the side that finished third 12 months ago earned a chance at glory this time around.

AEK await in the final after winning a hard-fought encounter with Murcia 77-75 on home court.

The hosts led by 15 points at one stage in the second quarter and, having briefly lost the lead in the third, were ahead by nine in the last period.

Murcia again closed the gap but narrowly fell short, as 20 points for Manny Harris, as well as contributions of 16 and 15 from Kevin Punter and Dusan Sakota, were enough for a final berth.