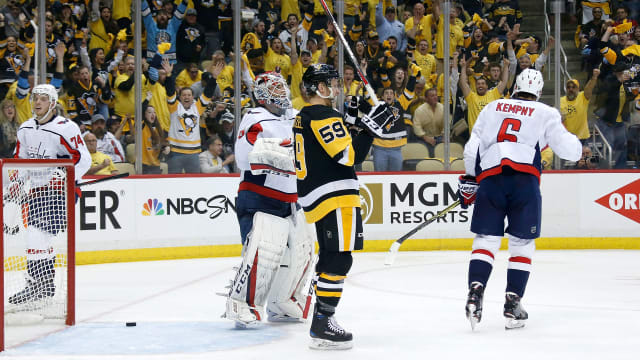 Jake Guentzel's second-period goal for the Pittsburgh Penguins against the Washington Capitals in game four on Thursday saw him join an illustrious club.

This was his ninth goal of the postseason. He has 11 assists as well, giving him 20 points in the playoffs in only 10 games.

Only seven players have ever accomplished that feat in NHL history, according to NHL public relations.

Only Wayne Gretzky and Mark Messier have accomplished the feat twice.

Jake Guentzel of the @penguins is the seventh different player in NHL history to record 20+ points within his team's first 10 games of a postseason. #NHLStats#WSHvsPIT#StanleyCuppic.twitter.com/UPQUnj9By3

With his 20 points this postseason, Guentzel now has 41 career playoff points in 35 games played. That is 1.17 points per game. Only five players have a better average in NHL history, according to the Athletic.