Pliskova up and running for 2018 with Stuttgart title 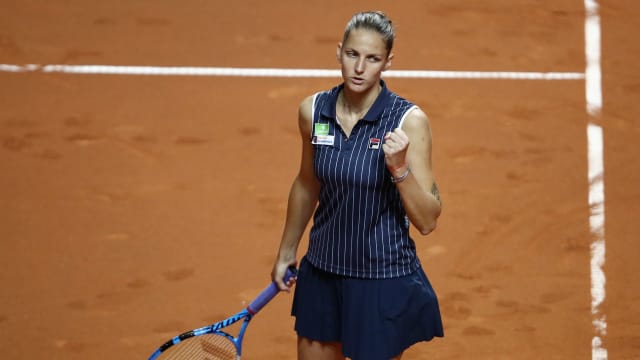 Karolina Pliskova sealed her first WTA Tour victory of the year as she defeated Coco Vandeweghe 7-6 (7-2) 6-4 in the final of the Stuttgart Open.

Pliskova trailed in the first set and then in the tiebreak, but she battled back on both occasions and found life rather easier in the second.

Although a fall and subsequent lengthy stoppage did not appear to hinder Vandeweghe, a series of errors allowed her opponent to take control and claim her 10th career title.

After beating three players ranked in the top 10 earlier in the week - including world number one Simona Halep - this was a step too far for the 16th-ranked Vandeweghe.

Pliskova's serving had been key to her progression to this final, but she was broken in a first game that included three Vandeweghe winners.

The world number six broke back to love to draw level in the fourth game, though, and then won seven straight points to clinch the tiebreak when the first set went the distance.

Vandeweghe required a medical timeout early in the second after injuring her right hand in a painful slip, before finding the net to hand Pliskova a break and the lead.

The American cracked her racket in frustration when she missed an opportunity to break back and soon gifted away another service game.

Pliskova could not initially press home her advantage, failing to serve out the match before making amends just as Vandeweghe looked to be threatening a remarkable recovery.