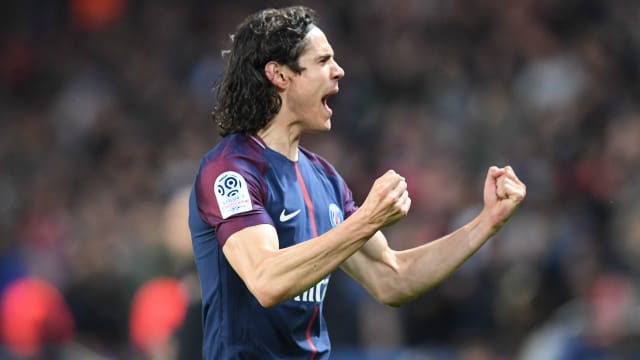 Edinson Cavani said he did not know about his new record as he surpassed former team-mate Zlatan Ibrahimovic in Paris Saint-Germain's goalscoring charts.

Cavani took his Ligue 1 tally to 115 for French champions PSG after scoring twice in Sunday's 2-2 draw against Guingamp.

Cavani went into the match tied with Ibrahimovic on 113 goals before his brace helped him leapfrog the Swedish star, whose overall total of 157 was broken by the Uruguay international forward in January.

"I didn't know that I had set a new record, but I'm happy to have written a little more history with this shirt," Cavani said.

El Matador to the rescue with the second half brace #PSGEAGpic.twitter.com/81THZ79vc7

Cavani came to PSG's rescue in Paris after the French capital club sensationally fell 2-0 behind against Guingamp.

PSG were trailing by two goals with 15 minutes remaining until Cavani converted a penalty before the Uruguayan salvaged a draw for Unai Emery's men seven minutes later.

"No, we are not on holiday already. This is not true," Cavani added. "Sometimes, there are difficult matches. We have won the Ligue 1 title, but we were still trying to concentrate as hard as possible - at 2-0 down, it was important that we at least fought back to draw.

"I am under contract with PSG! I am very good here. I am proud to be here. I hope to continue on this path, which started five years ago. I want to keep winning with this shirt."

Cavani also paid tribute to head coach Emery, who will leave PSG at the end of the season.

"I congratulate the coach," the 31-year-old said. "He gave everything, every single day. I wish him the best in his career."