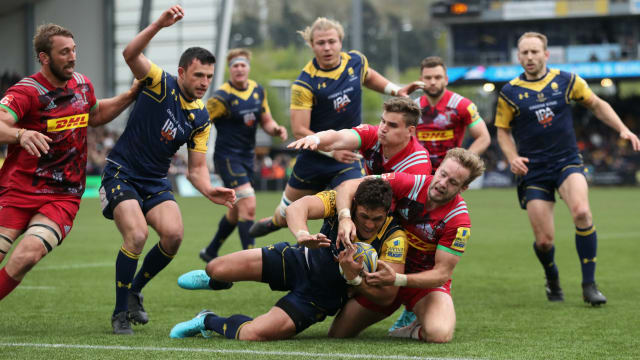 Worcester Warriors retained their Premiership status in style and sent London Irish down with a 44-13 thumping of sorry Harlequins, while Exeter Chiefs will finish the regular season top after beating Sale Sharks.

The Warriors had the point they needed to stay up by half-time at Sixways Stadium on Saturday courtesy of tries from Bryce Heem, Jackson Willison, Darren Barry and Ben Te'o.

A Charlie Walker try and eight points from the boot of Marcus Smith left Quins 12 adrift at half-time, and Worcester crossed a further three times to consign the London side to an eighth defeat in their last nine Premiership matches.

Willison helped himself to a double either side of five-pointers from Francois Hougaard and Jamie Shillcock as Worcester avoided the drop with a game to spare, and sent the Exiles straight back down to the Championship.

Exeter cannot be caught at the summit after the defending champions ended Sale's play-off hopes with a 34-19 win at Sandy Park.

Nic White, Lachie Turner, Jack Yeandle and Greg Holmes crossed for the rampant Chiefs, who stretched their winning run to eight matches in all competitions to go 13 points clear of Saracens.

Bath came out on top in the West Country derby at Kingsholm, Tom Homer scoring a superb solo try in a 43-20 thrashing of Gloucester.