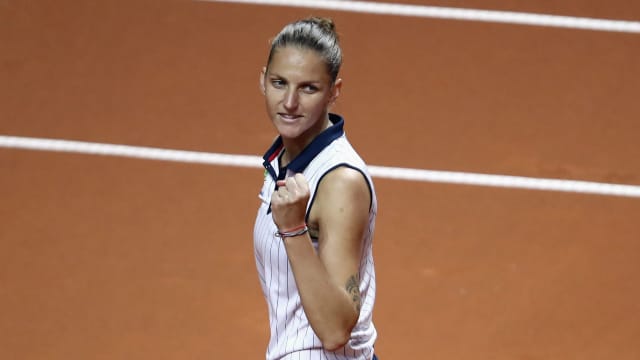 Karolina Pliskova produced a serving masterclass as she overcame Anett Kontaveit to set up a meeting with Coco Vandeweghe in the Stuttgart Open final.

World number six Pliskova won all 16 points on her serve in the second set to complete a 6-4 6-2 triumph over the unseeded Estonian in just over 65 minutes.

A pair of double-faults from Kontaveit handed her opponent three break points in game five of the opening set, but a couple of routine misses from the Czech let her back in.

Errors would prove the world number 31's undoing, though, and Pliskova served the set out to love, before racing to a routine victory over her powerless opponent.

"My serve was there, that's always the key with my game," said Pliskova. "Happy I found my rhythm in the second set and I started to feel the game a little better, that's why the score was easy."

"My serve was there, that's always the key with my game."@KaPliskova reflects on her @PorscheTennis semifinal victory and looks ahead to her forthcoming final with @CoCoVandey! pic.twitter.com/QTkU39GgT0

She will come up against another big server in the final in the shape of Vandeweghe.

The American bested Caroline Garcia 6-4 6-2, though she needed the help of the net to wrongfoot her opponent and consolidate her solitary break in the opening set.

Vandeweghe showed great speed to return a drop-shot from Garcia and take a 3-2 lead in the second, and she reeled off the remaining three games to edge closer to a first WTA Tour title in almost two years.