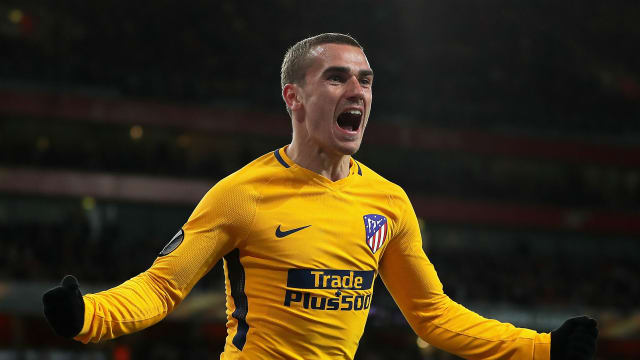 The trio all played in Thursday's bruising Europa League semi-final first leg against Arsenal in London, with Griezmann scoring a priceless late away goal to take back to Spain next week.

The suspended Jose Gimenez will also miss the clash, while it will come too soon for Filipe Luis, despite his return to full training on Saturday after suffering a broken leg against Lokomotiv Moscow on March 15.

Speaking at his pre-match press conference, Simeone said: "You guys know me really well already - we will look for a victory tomorrow. We want to end the season as high as possible, so I will use the players that I think are in best shape for this game.

"Gimenez won't be there because he is suspended, Griezmann neither because he needs to rest after the last game and Saul also had a lot of work lately playing in the wings. These three players plus Oblak, who has a little pain in the calf, won't come with us.

"The rest of players that I think are ready to win a difficult game against Alaves will go - we're still looking to finish in as high a position as possible."

T-minus  day for #AlavésAtleti.
Look who trained with his mates today!
https://t.co/9IB5jrxzHn#AúpaAtletipic.twitter.com/o2wfiDV9wf

Simeone swatted away suggestions that his side's focus would be on the second leg against Arsenal, insisting their ambition to finish the league season strongly remained undiminished.

He added: "We just think about the Alaves game now. We know how important and how excited everybody is about Thursday's game but we have a difficult game against Alaves before that.

"They changed their coach and improved a lot and we want to end the Spanish league in the highest position possible. After that game, of course, we will only think about a game that had its first part in London."

| SQUAD LIST
Check out who @Simeone called up for #AlavésAtleti#AúpaAtletipic.twitter.com/hia11yAgD7