Pliskova battles past Ostapenko after Halep crashes out 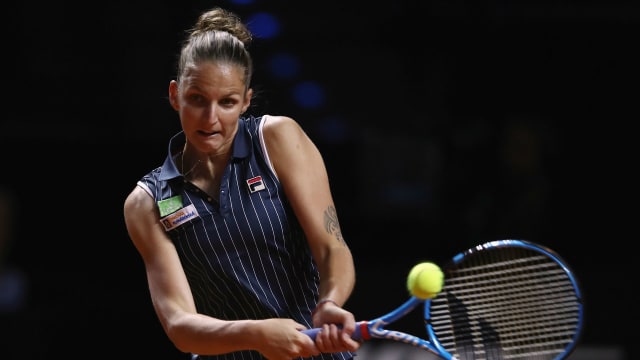 French Open champion Jelena Ostapenko was knocked out of the Stuttgart Open in the quarter-finals despite a battling effort against fifth seed Karolina Pliskova.

Ostapenko was hampered by a left foot injury in the last-eight contest but still pushed Pliskova to three sets on the clay.

But it was the former world number one who prevailed, though she had to stage a comeback to win 5-7 7-5 6-4.

Ostapenko broke to love to win the first set before Pliskova reversed the scoreline to force a decider, losing just five points on her first serve in the second set.

The two plays traded breaks in the third and fourth games of the decider before Pliskova struck again in the fifth. The Czech had to face three break points as she served for the match but managed to close it out and move within a win of her first final since July.

Anett Kontaveit is next up for Pliskova after she overcame Anastasia Pavlyuchenkova 7-5 6-7 (6-8) 6-4.

"Everything went very fast. It was like a flash. I don't really know what happened during the match but I know she served very well and I couldn't return, then my serve went a little bit down.

"The key was she was staying strong in the whole match and that's why she won.

"I still feel the leg [injury] and it was really tough to move as I do every time. The court is difficult. I couldn't play my best tennis so that's maybe why it didn't go my way."

Vandeweghe will meet Caroline Garcia in the last four, the Frenchwoman coming from behind to beat Elina Svitolina 6-7 (4-7) 6-4 6-2.