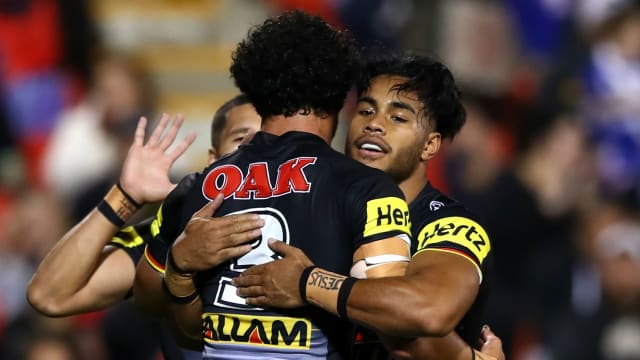 Penrith Panthers came from behind to defeat Canterbury Bulldogs 22-14 in the NRL on Friday, while Newcastle Knights registered a rare away win at Manly Sea Eagles.

Marcelo Montoya and Will Hopoate each went over for first-half Bulldogs tries, converted by Moses Mbye, before Corey Harawira-Naera hit back with a try for Penrith a minute before half-time at Panthers Stadium.

James Maloney converted Harawira-Naera's score to follow an earlier penalty goal, and the late rally equipped the Panthers to dominate the second half.

Isaah Yeo then claimed the Panthers' fourth try in the 66th minute, Tyrone Peachey sending him over in the corner to complete a move orchestrated by influential five-eighth Maloney, who had converted Leota's score.

Despite failing to add the extras to Yeo's effort, Maloney also sent over two second-half penalties to help seal the points for the home side, who moved up to second, two points behind leaders St. George Illawarra Dragons. The Bulldogs remain second from bottom.

Earlier, Knights overcame the absence of captain and star halfback Mitchell Pearce, sidelined by a ruptured pectoral muscle, to defeat Manly 18-12 away from home.

The visitors opened the scoring through Connor Watson in the 16th minute at Brookvale Oval, but it was Manly who led at the break thanks to Dylan Walker, Daly Cherry-Evans converting his score to make it 6-4.

The hosts lost Lachlan Croker to a suspected torn anterior cruciate ligament and Matthew Wright to concussion for the second half.

And despite Cherry-Evans setting up Shaun Lane to barge his way over two minutes after the resumption, Newcastle took control in the closing stages.

Slade Griffin seized on a defensive lapse to cross in the 58th minute, Ken Sio adding the extras and then sending over a penalty in the 65th minute.

Cherry-Evans returned fire to level the scores at 12-12 after the Knights were penalised for slowing down the play-the-ball.

Newcastle refused to give up, though, Kalyn Ponga skipping past Cherry-Evans and setting up Nathan Ross to claim a match-winning 75th-minute try, converted by Sio.

The perfect cut-out ball from Ponga to the Ross dog!

Could this wrap it all up for the @NRLKnights?#NRLManlyKnights 12-18 with 3 minutes to go.#TelstraPremiership#NRLpic.twitter.com/Ez4THGttDo