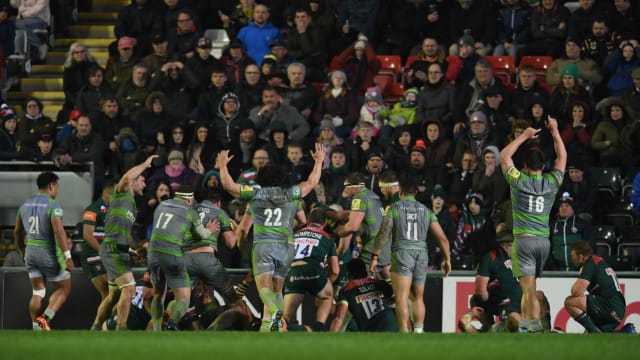 Leicester looked set to leapfrog Newcastle in the standings with a victory, but, after Sione Kalamafoni was shown a yellow card for an offside, Hogg powered over at the end of a late barrage, with the TMO deeming there was insufficient evidence to overturn the on-field decision to award a try despite the former Scotland international appearing to make a double movement.

The Falcons' first win at Welford Road in 20 years consequently moved them above Wasps and into third, while Leicester's final-four aspirations will be over if the Dai Young's men win at home to Northampton Saints on Sunday.

Vereniki Goneva got his 100th Newcastle appearance off to a fine start by bursting away from a ruck 40 metres out and dotting down against his former club.

England international Jonny May helped restore parity, with George Ford converting and slotting through a pair of penalties between three-pointers from Josh Hodgson and Juan Pablo Socino to make it 13-13 at the break.

Mike Fitzgerald got the Tigers' nose in front early in the second half and fly-half Ford took his tally for the night to 13 with another successful effort from the tee at the hour.

Goneva set up a tense finale with his second of the match with 12 minutes remaining, and Kalamafoni's yellow card helped Newcastle turn the match around.

With the 80 minutes elapsed, Hogg fell down by the line and got back to his feet when the referee did not blow his whistle. The back-row forward then touched down for a second time, but the try was seemingly awarded for his initial effort.

Takalua held his nerve to convert for a win that puts the Falcons on the brink of a semi-final spot, with a huge clash at home to Wasps to come next weekend.

What a finish! The visitors steal it at the death to end their 20-year wait for a win at Welford Road

Falcons move into third with one game left to play! #LEIvNEW#AvivaPrempic.twitter.com/JMU3wlrVgB