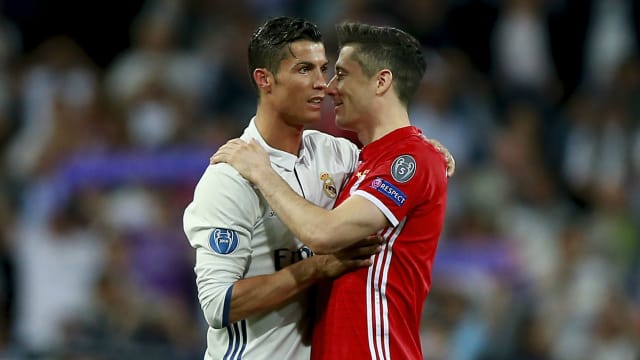 The prolific pair could line up as team-mates next season if Los Blancos' reported interest in the Poland international leads to a move.

But they will first meet as opponents at the Allianz Arena on Wednesday as Bayern host the European champions in the opening leg of a highly-anticipated Champions League semi-final.

While Heynckes acknowledged it will be difficult to stop Ronaldo - who has netted 15 goals in the competition this term - he issued a reminder of the danger facing Zinedine Zidane's men.

"I respect Cristiano Ronaldo. He has had a superb career. But you need to play well as a team to win the Champions League," Heynckes said.

"We analyse our opponents and prepare to beat them.

"In Robert Lewandowski, we also have a striker who has already scored 39 goals this season. So you might ask: how do you stop Lewandowski?"

Asked whether he would swap the two, Heynckes would not be drawn into the debate, responding: "This is a question for journalists, not for us."

Robert Lewandowski for Bayern in the Bundesliga this season:

Heynckes, who is set to re-enter retirement at the end of the season, is attempting to sign off by winning the Champions League for a third time, having led Madrid to glory in 1998 before overseeing Bayern's win at Wembley at the end of his last spell with the club five years ago.

Zidane is in the hunt for the same distinction after prevailing in the past two finals and his measured approach to management has won Heynckes' respect.

"I was always a great admirer of Zizou the player, but now I also admire him as a coach. I like how calm he is," the German said.

"This shows me that he's not showcasing for the public or the camera. He's a top trainer."