Everton put four points between them and 10th-placed Newcastle United with a cagey 1-0 win at Goodison Park that goes some way to lifting the gloom hanging over Sam Allardyce's reign.

Theo Walcott netted the only goal six minutes after the interval with one of few moments of quality in what was a disappointing 100th match in charge of the Magpies for Rafael Benitez.

The former Arsenal winger skilfully brought down Yannick Bolasie's cross and rifled an assured finish into the roof of the net for his third Everton goal and first in the top flight since notching a double against Leicester City in January. 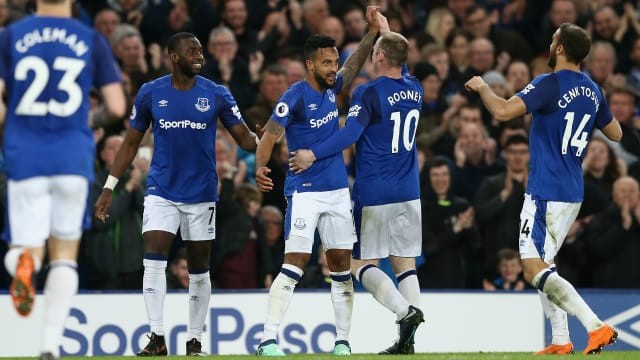 With little other than mid-table positioning at stake, Walcott's goal only briefly livened up a contest that was largely mired in a sluggish tempo and minimal attacking risk, although Allardyce will be no less satisfied to end a three-game league run without a win.

The victory also served to improve the Toffees' recent dominance over Newcastle, a side they have now beaten in five successive league meetings, and ended the visitors' impressive run of four straight wins in the process.

| Introducing the world's first 'virtual matchday mascot', enabling a a child too sick to travel from home get the full experience at Goodison! @_noisolation@WellChild! #JacksRobotMascot

Everton had won the four previous league meetings between the teams and might have been on their way to a fifth had Cenk Tosun made a better connection with a sliced attempt inside three minutes.

It was a rare sight of goal in an otherwise muted opening, with Newcastle keeping a compact defensive shape, content to allow the home side to dominate possession.

A brief lapse in concentration almost proved the visitors' undoing 10 minutes shy of half-time, but the chance fell to the wrong man as a stretching Phil Jagielka volleyed high and wide from Michael Keane's clever header back across the face of goal.

Afforded a reprieve in that instance, Newcastle repaid the debt moments later. Jordan Pickford's lackadaisical clearance deflected off Kenedy and straight to Perez, who wasted the opportunity to punish a scrambled Everton defence by over-hitting a pass intended for the unmarked Islam Slimani.

Perez, a scorer on each of his last three appearances, found himself in a good position soon after the interval but, having broken into the area, shot harmlessly wide under pressure from Keane.

Walcott made no such mistake in the 51st minute. Yannick Bolasie swung in a cross from deep on the right that dropped kindly for Walcott at the far post, before the winger cut inside and clinically fired into the roof of the net to break the deadlock.

10 - Theo Walcott has been directly involved in 10 goals in his last nine Premier League games against Newcastle (5 goals, 5 assists). Haunt.

Morgan Schneiderlin limped off immediately after the goal, forcing the introduction of Tom Davies, while Benitez responded by replacing Slimani with fellow striker Dwight Gayle.

The twin changes almost worked in the Magpies' favour when Gayle manoeuvred space on Davies from a corner, only to wastefully hook his finish over the bar.

Newcastle did have reasonable claims for a penalty waved away inside the final 10 minutes - the ball striking Jagielka's arm - while Seamus Coleman made a key stoppage-time header from Jacob Murphy's dangerous delivery to leave the away side with a first loss since their last trip to Liverpool on March 3.

Everton, meanwhile, have now nudged into eighth, a point ahead of Leicester City.