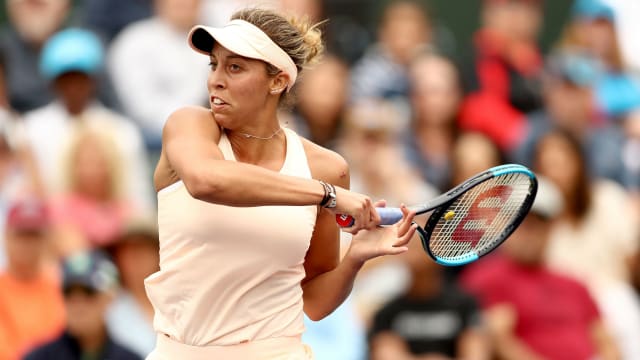 Late call-up Madison Keys put defending champions the United States through to a Fed Cup final against the Czech Republic on Sunday.

Keys was drafted in to replace CoCo Vandeweghe for the fourth rubber against France's Pauline Parmentier after Sloane Stephens thrashed Kristina Mladenovic to put the holders 2-1 up.

And the 23-year-old justified the faith shown in her by US team captain Kathy Rinaldi, defeating Parmentier 7-6 (7-4) 6-4 in Aix-en-Provence to knock the hosts out.

Petra Kvitova got the job done for 10-time champions the Czech Republic in the other semi-final against Germany, seeing off Angelique Kerber 6-2 6-2 to leave the majority of the crowd disappointed in Stuttgart.

Both teams will now prepare for the final, which takes place on the weekend of November 10-11.

Now that's cause for celebration!

IT'S GOING TO BE CRAZY

Keys' selection at the expense of Vandeweghe caused a bit of a stir, but she made sure to leave her mark by defeating France's Parmentier.

It was not all smooth sailing, Parmentier racing ahead in the second set, only to fall short as Keys claimed it 6-4.

"It feels amazing, but not for me - to do that for this team and help us back to the final," Keys told the competition's official website.

"I knew [Pauline] would play well, she was so good against Sloane yesterday.

"I love playing in atmospheres like this, even if they are not all cheering for you it still makes for a great game.

"It is going to be a crazy final!"

From 1-4 down, @Madison_Keys reels off four straight games thanks to shots like these...

SLOANE STARS FOR THE STATES

There was no such danger of Stephens conceding her lead in the earlier rubber, as she made light work of Mladenovic.

It took Stephens just 54 minutes to overcome her opponent 6-2 6-0, and set the stage for Keys' wonderful performance.

It could well have been a hostile atmosphere for the Czech Republic's Kvitova, but the world number 10 held her nerve to ease past Kerber in convincing fashion.

Kvitova and Karolina Pliskova had put the Czechs well in control on day one, and although Julia Georges made it 2-1, Kerber could not complete the comeback for Germany.

In fact, Kerber's hopes were swiftly dashed - Kvitova picking up where she left off on Saturday to send the Czechs through.

PLAY-OFF DELIGHT FOR BELGIUM AND BELARUS

In the World Group play-offs, there were wins for Belarus, Romania, Australia and Belgium.