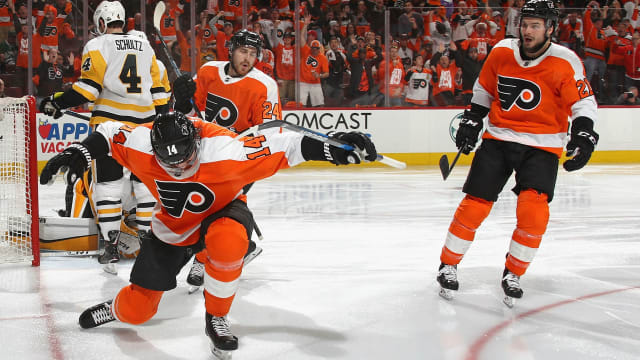 Philadelphia were sent packing in the NHL playoffs, but center Sean Couturier did everything in his power to help the Flyers attempt to overcome a 3-1 series deficit.

The star center scored the game-winning goal in game five against the Pittsburgh Penguins and had a hat-trick and two assists in Sunday's game-six loss.

He achieved the feats while playing with a torn MCL suffered at practice on Tuesday after an ugly collision with team-mate Radko Gudas.

Couturier missed game four with the right-knee injury but had enough strength and playoff toughness to fight through the pain. He told reporters Sunday the injury will not require surgery but if it occurred during the regular season, it would need a four-week recovery.

"I've got a lot of respect for that guy," Flyers captain Claude Giroux told reporters after game five.

"He's one of our leaders, and you can put him in any situation ... and it's impressive."