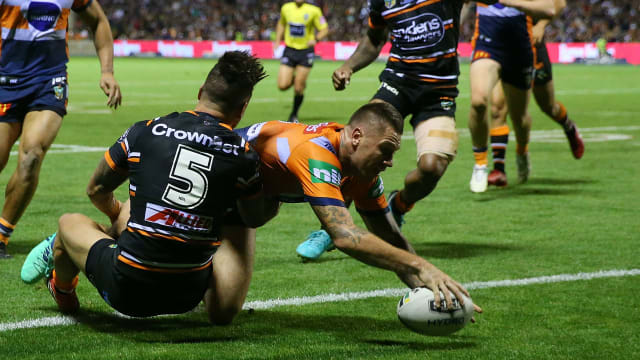 Wests Tigers were denied the chance to move joint-top of the NRL ladder as Newcastle Knights snatched a last-gasp 22-20 victory at Scully Park.

A forgettable first half saw the Tigers go in 10-0 behind in West Tamworth, but the hosts were rejuvenated after the break.

Three tries in six minutes after the restart saw the home side surge into an 18-10 lead, and with a minute remaining they still enjoyed a two-point advantage.

However, they could not hold on as the Knights piled on the pressure, Shaun Kenny-Dowall eventually crossing in the corner after collecting Jamie Buhrer's cross-field kick to seal a dramatic win.

Burgess ran 203 metres, provided four offloads and six tackle busts in the comprehensive victory, but his day was spoiled by a high tackle on Aidan Sezer - a challenge that saw him placed on report.

The England international could face another suspension for the incident which would be a blow for his team having only just returned from a two-week ban for raising an elbow to Canterbury Bulldogs' Josh Morris.

His 59th-minute indiscretion marred a scintillating performance that saw the Rabbitohs run in seven tries - including a fourth in a row for Greg Inglis.

Burgess was later joined on report by his brother George, while his other sibling Tom was accused of making a lot of a challenge from Elliott Whitehead by Raiders coach Ricky Stuart.

The Cowboys went into the home clash having only tasted success in the opening round but they quickly set about the Titans, with Johnathan Thurston keeping the score ticking over from the tee.

Thurston kicked three penalties and converted Ben Hampton's first-half try to secure a 16-2 lead, an advantage they extended after the break thanks to tries from Jason Taumalolo and Coen Hess.