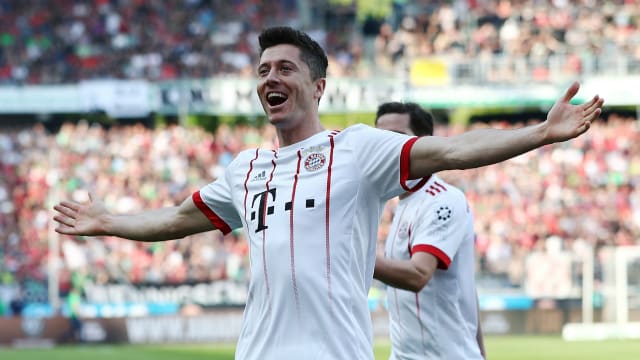 Robert Lewandowski came off the bench to break a Bundesliga record as he found the net in Bayern Munich's 3-0 win at Hannover.

The champions left Joshua Kimmich, Mats Hummels, Franck Ribery, Javi Martinez, Thomas Muller and Lewandowski on the bench ahead of Wednesday's visit of Real Madrid in the Champions League semi-finals.

And while Jupp Heynckes' men took until the 57th minute to break the deadlock, goalkeepers Sven Ulreich and Philipp Tschauner excelling before the break, Bayern recorded their 11th consecutive league win in this fixture with a second-half burst.

Muller's introduction as a half-time substitute proved a key moment in the game, his deflected left-foot volley from a Juan Bernat cross breaking Hannover's resistance.

Lewandowski then headed in within five minutes of his own introduction to become the most prolific non-German for a single club in Bundesliga history with his 105th top-flight goal for Bayern.

That moved him past the 104 goals scored by Claudio Pizarro, who counted Bayern among his clubs, for Werder Bremen.

Sebastian Rudy adding a late third to complete the scoring and Bayern will now prepare to welcome Madrid as Heynckes' side march on towards a potential treble ahead of the arrival of new coach Niko Kovac - whose Eintracht Frankfurt face his future employers in the DFB-Pokal final - at the end of the season.

Did you ever doubt him? #packmas#H96FCBpic.twitter.com/EIqMSkvXVb