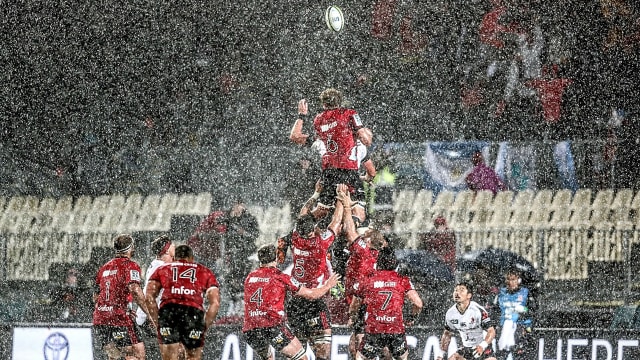 Torrential rain in Christchurch could not stop the Crusaders moving top of the New Zealand Conference with a 33-11 victory over the winless Sunwolves.

In difficult conditions there were errors aplenty from both sides, but the Crusaders had enough quality to see off a valiant effort from the Japanese visitors.

A double from Ryan Crotty - his first coming in the opening minute - plus scores from Matt Todd, Manasa Mataele and Jack Stratton set up the hosts' win.

The Sunwolves did get on the board before the break through Michael Little, but defensively they were unable to keep Crusaders at bay as they slipped to an eighth loss of the Super Rugby campaign.

That's fulltime with a 33-11 win over the @sunwolves in crazy conditions! Thanks to our loyal fans for supporting us here at home tonight and for sticking it out in that weather! #CRUvSUN#wewill#crusadeonpic.twitter.com/n86h0d4aFv

"It made it slippery, especially when the hail came down, and it probably took us too long to adjust," said Todd.

"They made us work for every point we got. We had to defend our line at times, and then we built some phases to get some points late which was pleasing."

In Brisbane, the Reds' miserable run of form continued as they were thrashed 36-12 by the Chiefs, the hosts' fourth defeat in a row.

Victory was assured in the opening half hour at Suncorp Stadium as the Chiefs racked up 24 points, showing quick hands to keep the ball moving and create scoring opportunities for Tyler Ardron, Charlie Ngatai and Brodie Retallick.

Liam Polwart extended the Chiefs' advantage early in the second half and although Samu Kerevi's brace threatened to rob the Chiefs of a bonus point, Samisoni Taukei'aho went over after the clock had gone red to secure a maximum haul.

120 - @ChiefsRugby have won their last three games on the bounce against the Reds, outscoring them 120-25 in that time. Rule. pic.twitter.com/arqCk5wspa