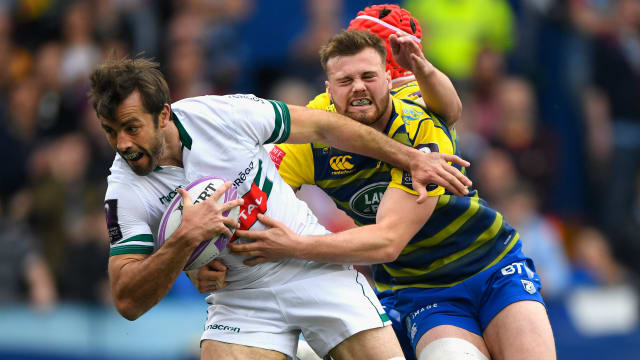 Cardiff Blues set up a showdown with Gloucester in the European Challenge Cup final after the Welsh club overcame Pau 16-10 on Saturday.

Jarrod Evans kicked 11 points, including converting Gareth Anscombe's early try at a raucous Cardiff Arms Park, before the Blues held firm in the closing minutes to book a trip to Bilbao.

Conrad Smith touched down in the first half for Pau but the Top 14 side failed to muster a point after the break, despite extended periods of pressure.

Cardiff's reward is a clash with last year's runners-up Gloucester at San Mames Stadium on May 11.

Anscombe provided the finish after lock Seb Davies' break as the hosts caught Pau cold with a try inside the opening six minutes of the second semi-final.

However, the visitors responded impressively to the early setback. After Tom Taylor missed a penalty attempt, Julien Pierre's charge down of a clearing kick allowed team-mate Smith to seize on the loose ball and dive over the line.

Taylor added the extras and was also on target with a penalty before half-time, though his successful three-pointer was sandwiched in between a pair of penalties from the reliable Evans.

The game tightened up in the second half as Cardiff kept their opponents at bay.

Alex Cuthbert's crunching tackle on Watisoni Votu exemplified the defensive effort from Danny Wilson's side, albeit they were fortunate Pau failed with a penalty that would have drawn them level.

Evans, in contrast, made no mistake following a high tackle in the 72nd minute, with the Blues then withstanding some late pressure to retain their six-point lead through to the final whistle.