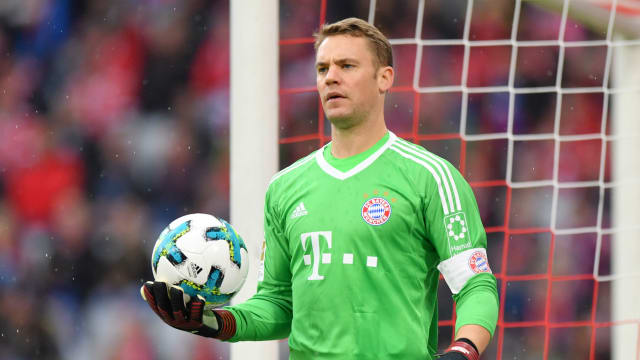 Manuel Neuer has returned to Bayern Munich training ahead of the Champions League semi-final with Real Madrid, handing the Bundesliga champions a major boost.

The Germany goalkeeper has not featured since September due to a fractured metatarsal, putting his spot at the World Cup in jeopardy, but he is edging closer to a long-awaited return after participating in a practice session with his team-mates on Friday.

Bayern coach Jupp Heynckes stated in his news conference ahead of this weekend's Bundesliga trip to Hannover that it is too soon for club captain Neuer to return to action.

"I think the discussion to put Manuel Neuer back in the first eleven starts way too early. It will not be a discussion for me," he said.

Welcome back, Manuel! @Manuel_Neuer joined up with the rest of the #FCBayern boys for parts of today's training session

"It is important that we did everything right with Manuel Neuer - with the doctors, with the physiotherapists, with Manuel, with the fitness instructors and with me. This was our primary target."

Heynckes' side take on Madrid in the first leg of their Champions League semi-final on April 25 and they remain on track for a treble with a DFB-Pokal final date against Eintracht Frankfurt - led by incoming coach Niko Kovac - set for May.

Neuer will be hopeful of returning to first-team action before the end of the season and proving his fitness to Germany boss Joachim Low ahead of the World Cup.