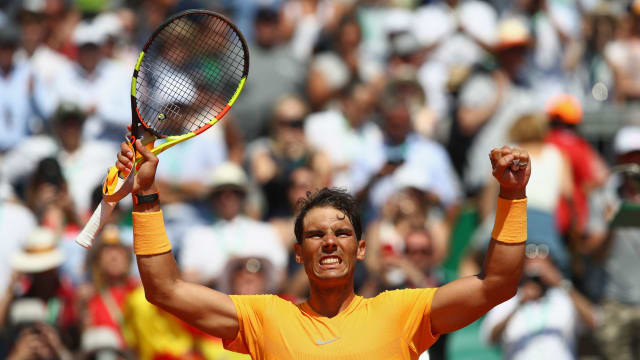 Rafael Nadal produced an utterly dominant performance to power into the semi-finals of the Monte Carlo Masters with an easy win over Dominic Thiem.

Thiem was the only player to beat Nadal on clay in Rome last year, but the Spaniard dispensed of the Austrian in just 68 minutes, claiming a 6-0 6-2 victory.

He will now face Grigor Dimitrov in the semi-finals as he bids to win an 11th Monte Carlo title.

Dimitrov overcame David Goffin 6-4 7-6 (7-5) while the other semi-final will be contested by Kei Nishikori and Alexander Zverev.

Nishikori edged a three-set battle with Marin Cilic and Zverev also went the distance with Richard Gasquet but, with Nadal in such ominous form, it is tough to see anybody stopping him extending his own record for Monte Carlo titles.

'The King of Clay' impressed even himself with his brutal demolition of Thiem, in which he lost only six points on serve and did not face a break point.

Speaking after the contest on Court Rainier III, the 16-time grand slam champion said: "I think I played a great match - the best of the tournament.

"I played very aggressive, I knew I couldn't give Dominic time to hit the ball and I didn't."

The crown remains firmly in place!

of clay @RafaelNadal improves to 66-4 lifetime at #RolexMCMasters with 6-0 6-2 demolition of Dominic Thiem. pic.twitter.com/qOHgzzuuu9

Dimitrov ended Goffin's hopes in both the singles and the doubles on Friday.

The Bulgarian capitalised on Goffin's inability to serve out the second set en route to victory in their last-eight meeting, clinching victory in the subsequent tie-break.

The pair teamed up for the doubles section of the tournament, already winning two matches, but Dimitrov opted to pull out of their quarter-final clash with Oliver Marach and Mate Pavic.

"Obviously this is the first tournament on clay and one-handers [backhands] is not the easiest thing on clay. I had to save myself a little bit," Dimitrov told Sky Sports. "I hate to disappoint David. He was actually ready to play so I apologise for that but that's the situation. Hopefully we can team up again some time."

Nishikori has been conspicuous by his absence from the latter stages of the Masters 1000 events, and his 6-4 6-7 (1-7) 6-3 defeat of Cilic ensured he will appear in the semi-finals of such a tournament for the first time in 20 months.

It looked as if his wait may continue after the Japanese star squandered three match points in the second set, with Cilic, having earlier had to take a medical time-out because of a knee issue, capitalising on a string of errors in the tie-break to force a decider.

But Cilic netted in the eighth game of the third set to hand Nishikori the ultimately crucial advantage, as he prevailed after two hours and 56 minutes.

He now faces what promises to be a similarly challenging encounter with third seed Zverev, who fought back to defeat Gasquet 4-6 6-2 7-5 on his 21st birthday.

A late-night thriller in Monte-Carlo came to a spectacular end...#RolexMCMasterspic.twitter.com/McUTSuYtvN