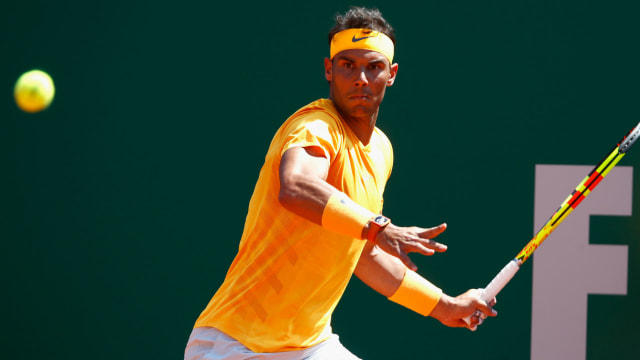 An imperious Rafael Nadal swatted Dominic Thiem aside in just over an hour to march into the semi-finals of the Monte Carlo Masters.

Thiem was the only player to beat Nadal on clay in Rome last year, but suffered a humiliating 6-0 6-2 defeat to the magnificent 16-time grand slam champion in only 68 minutes on Friday.

Defending champion Nadal has looked unstoppable as he eyes an 11th title in Monaco and an out-of-sorts Thiem was unable to live with the ruthless Spaniard, who lost only six points on serve and did not face a solitary break point.

Nadal showed no mercy on the fifth seed, who dumped Novak Djokovic out on Thursday but was given a lesson by the world number one on Court Ranier III.

The top seed was flawless in a relentless performance, taking advantage of a bad day at the office for Thiem to set up a last -four meeting with Grigor Dimitrov.

The crown remains firmly in place!

of clay @RafaelNadal improves to 66-4 lifetime at #RolexMCMasters with 6-0 6-2 demolition of Dominic Thiem. pic.twitter.com/qOHgzzuuu9

Thiem found himself under immense pressure from the start on a hot day in the Principality and trailed 4-0 after drilling a forehand into the net.

Nadal, who must win the title this weekend to stay at the top of the rankings, continued to pepper the Austrian with a barrage of groundstrokes and wrapped up the bagel in only 33 minutes when his opponent thudded a backhand into the net.

There were cheers for a frustrated Thiem when he finally got on the board at 3-1 in the second set after Nadal broke for a fourth time, but the Mallorca native did not give him a sniff of an opening.

Thiem continued to make too many unforced errors, racking up 25 in total, and he was put out of his misery when he misjudged yet another backhand.