Khan: 'Cheat' Alvarez got off lightly 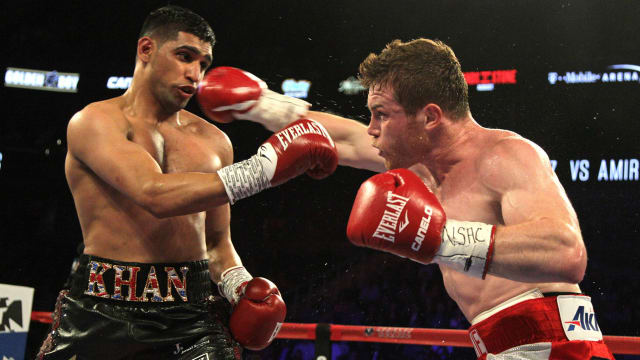 Amir Khan believes Saul 'Canelo' Alvarez "will always be known as a cheat" and should have been banned for longer than six months for failing drugs tests.

Alvarez was sanctioned by the Nevada State Athletic Commission this week after twice testing positive for clenbuterol in February.

The Mexican middleweight, who has maintained his innocence and put the adverse findings down to eating contaminated meat in his homeland, was forced to withdraw from a world title rematch with Gennady Golovkin next month, but will be free to return to the ring in September.

Khan, beaten by Alvarez in Las Vegas two years ago, feels the 27-year-old got off lightly.

"The six-month suspension doesn't mean anything because other fighters will see that and think 'I can take anything to get jacked up and only have a six-month ban'," the Brit said ahead of his comeback against Phil Lo Greco on Saturday.

"I hoped it would be more serious, a longer ban, to make sure that other fighters won't follow. Life bans or at least a couple of years so that you feel it.

"Six months is not going to do anything, it's barely one fight, he'll be straight back into a massive fight again. It is only going to push young fighters towards taking stuff because of the short ban.

"We don't know if he has been doing it all his career, you can never respect the same person.

"I have been fighting for more than 10 years and I have never thought about taking anything. Why should we allow others to do it and keep that respect.

"I am a clean fighter, I can always have my head up high, but others out there will know they have cheated deep down. People will always remember Canelo as a cheat."