Heynckes: I cannot imagine Wenger at another club 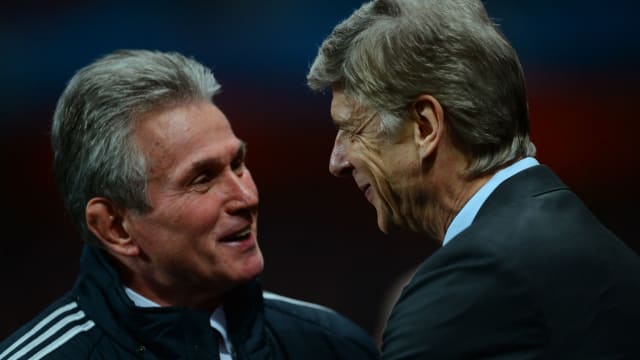 Bayern Munich boss Jupp Heynckes cannot imagine Arsene Wenger going on to coach another club after the veteran Frenchman announced he will step down at Arsenal at the end of this season.

Following sustained conjecture about his future, Wenger confirmed in a statement on Friday that he will call time on a celebrated tenure spanning three decades in north London.

Recent seasons have seen growing fan discontent over the 68-year-old's reign but three titles won between 1997-98 and 2003-04 established him as an undisputed pioneer in the Premier League era.

Heynckes is coming towards the end of his latest stint at Bayern - one of very few men to be Wenger's senior and still involved in top-flight European football - as the Bundesliga champions prepare to welcome current Eintracht Frankfurt boss Nico Kovac to the Allianz Arena.

Retirement has proved an impermanent state of affairs for the 72-year-old before but he expects Wenger to stay away once the current campaign concludes.

"First of all you have to say he has completed a magnificent career as a coach, in France and in England," Heynckes told a news conference ahead of Bayern's trip to Hannover on Saturday.

"He achieved lots of successes and his teams played attractive football predominantly. He was one of the top managers in European football.

"I think he could maybe acquire a job as a manager [director of football], but he could also return as a coach of another team in today's football.

"I do not know if he wants to do this anymore, I cannot imagine this. Actually, he does not need this anymore. He had an amazing career."

Arsenal lie sixth in the Premier League, with Wenger's remaining hope of giving his successor Champions League football lying with the Gunners' bid for Europa League glory. They host favourites Atletico Madrid in the first leg of their semi-final next Thursday.

Heynckes added: "With his philosophy, his style of play and his leadership style he has influenced English football in a very positive way.

"But in politics and in sport - when you get older someday, this will be also the case for you - you have to say, 'it was enough'."