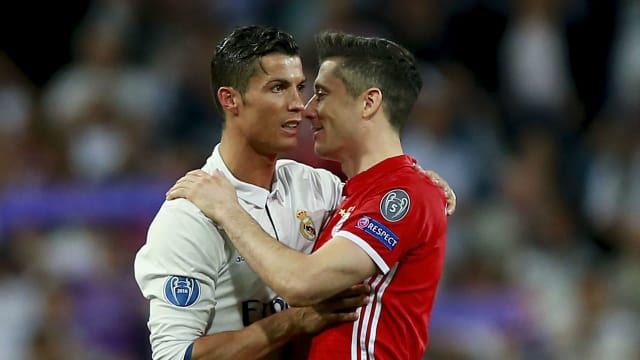 Robert Lewandowski and Cristiano Ronaldo may be two of Europe's leading marksmen but Bayern Munich boss Jupp Heynckes says they cannot be compared.

Real Madrid's Ronaldo has soared to the top of the scoring charts in Champions League after netting 15 goals, including a last-gasp penalty against Juventus in the quarter-finals.

Lewandowski has been less prolific this season, scoring five times in Europe, but enters this week's semi-final first leg with the Ronaldo's Madrid in fine form after netting six goals in his last five appearances in all competitions.

The pair are tipped to grab the headlines over the two matches in the coming weeks but comparing them is not something Heynckes is prepared to do.

"I do not think you can compare these types of players," he said.

"Robert Lewandowski is a player who plays in front of the opposing goal, especially with his back to the opponent. He is always attacked and this is one of the big strength of a striker who plays in this position."

Heynckes went on to describe the differences between the Portugal international and his Poland counterpart, praising the recent performances of Ronaldo.

"Cristiano Ronaldo is a player who often plays on the left side and moves between the lines," he added.

"What he does outstanding - especially lately, but also during his whole career - is that he has a good nose for scoring chances in the centre-forward position and in front of the opposing goal. He finishes these chances as well."

"But you could cite the match on Tuesday as an example: Lewandowski's goal-scoring rate is great. He scored the first two goals on Tuesday," Heynckes finished by saying.

The two in-form stars go head-to-head at the Allianz Arena on Wednesday, before facing off again in the return leg at the Santiago Bernabeu next week.