Wayne Rooney insists there is no fracture in his relationship with Sam Allardyce and believes the Everton manager deserves credit for injecting stability at the club.

The Toffees have risen to ninth place in the Premier League under Allardyce's stewardship, but a combination of underwhelming performances and inconsistent results have contributed to a sense of malaise.

Frustration at Goodison Park spilled over to include Rooney during the 0-0 home draw with Liverpool earlier this month, the former Manchester United man showing his displeasure at being substituted in the 57th minute. 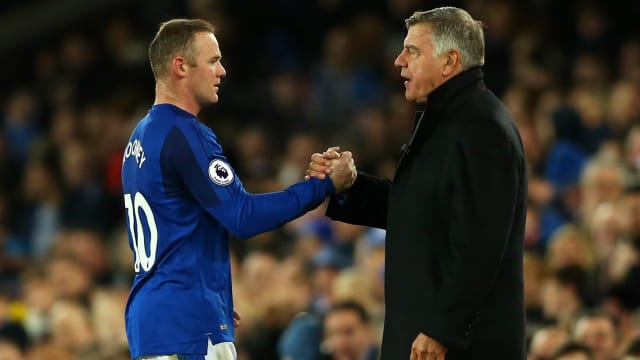 The 32-year-old, however, says there was nothing untoward in the reaction, claiming it was amplified only by his profile.

"It's me that gets highlighted a bit more than it would with other players," Rooney told Sky Sports News.

"There was no issue with me and the manager or with me coming off. I respect the manager's decision but of course there was frustration because I wanted to stay on.

"I spoke to him [afterwards] but really we spoke because of how it was getting built up to be something it wasn't. There was no issue over it."

In response to Allardyce's performance, for which the club this week canvassed supporter opinion, Rooney added: "He has done the job that's been asked of him.

"We were panicking a bit when he took over. There was talk of relegation and he has steadied that."

Since Sam Allardyce took charge at Everton, the Toffees have had 57 shots on target in the #PL - only Swansea (51) have managed fewer in that time #SWAEVEpic.twitter.com/0EZAYhH98l

The 24-year-old has played every match in the Premier League this season and has the backing of his club team-mate to be Gareth Southgate's starting goalkeeper at the World Cup.

"He is England's number one, he's the best keeper the country's got," former England captain Rooney said.

"In my opinion there are two goalkeepers who could play - Hart and Pickford - and unfortunately for Joe he hasn't played enough.

"[Pickford] is a character around the dressing room and at times this season he has saved us points and kept us in games."