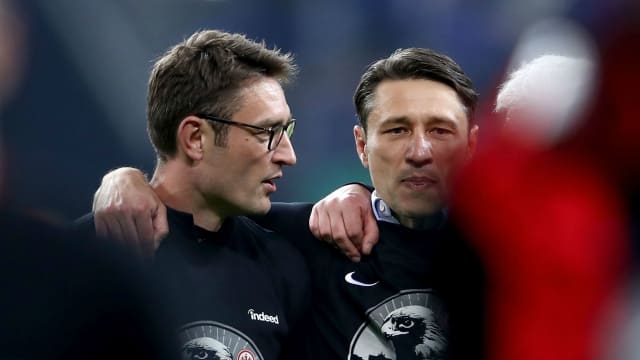 Niko Kovac insists everyone at Eintracht Frankfurt is united after they set up a DFB-Pokal final against his future employers Bayern Munich on Wednesday.

Kovac, who will become the Bavarian club's new coach at the end of the season, masterminded a slender 1-0 win over Schalke at the Veltins-Arena, with Luka Jovic scoring the only goal of the game after 74 minutes.

Frankfurt's director of football Fredi Bobic has been outspoken about the way Kovac's move to Bayern was announced, describing it as "disrespectful".

Kovac, though, is adamant that everyone at the club is pulling in the same direction and that he will share a drink with Bobic to celebrate their triumph, as he always has done.

He told ARD: "After everything that's been said in the last few days about us no longer being united, we saw today that we are certainly all united - both on and off the pitch.

"Whatever happens, we [Bobic and I] drink a beer or a wine because we're good friends and not just when we win."

Did someone say Berlin?

Bobic, who accused Bayern of thinking only about themselves during their recruitment of Kovac, agreed that the two men would share a drink after booking their second consecutive DFB-Pokal final appearance.

"It was that way before, and it will be that way in the future too," he said.

"Everything between Niko and I is fine."