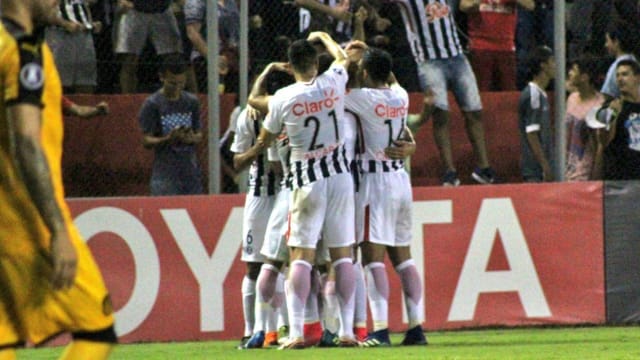 Libertad made it three wins from three matches in the Copa Libertadores after claiming a last-gasp 2-1 victory over 10-man Penarol.

Substitute and former Benfica striker Oscar Cardozo was the hero, with his 90th-minute free-kick preserving Libertad's 100 per cent record in Group Three on Wednesday.

Uruguayan visitors Penarol took the lead two minutes into the second half when Gabriel Fernandez beat his opponent on the half-way line before powering through towards goal and poking the ball beyond Rodrigo Munoz.

Libertad were staring at their first defeat of the campaign until the 74th minute after Santiago Salcedo bundled home a rebound for the Paraguayan hosts.

Penarol were reduced to 10 men with two minutes remaining when Rodrigo Rojo saw red for a second yellow card and Cardozo scored from the resulting free-kick - the veteran somehow beating Munoz at his near post from the edge of the penalty area.

Penarol are level on three points with Atletico Tucuman and The Strongest, who lost 2-1 against the Argentinian visitors.

Brazilian giants Corinthians stayed undefeated in Group Seven with a 1-0 win at Independiente.