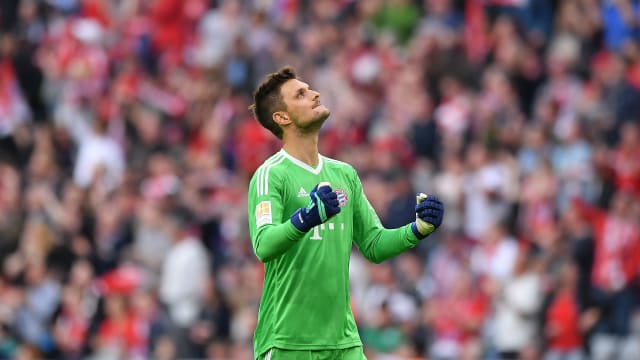 Thomas Muller scored a hat-trick as Bayern Munich crushed Bayer Leverkusen 6-2 to reach the DFB-Pokal final, but he was quick to credit goalkeeper Sven Ulreich's performance.

Bayern were irresistible at the BayArena on Tuesday, racing into a two-goal lead within nine minutes thanks to a Robert Lewandowski brace.

Lars Bender pulled one back soon after, but Leverkusen were blown away after half time thanks to Muller's hat-trick and Thiago Alcantara's solitary strike, with Leon Bailey netting a consolation free-kick.

But things could have been different had Ulreich - who has enjoyed a fine season in place of the injured Manuel Neuer - not pulled off a string of fine saves with the score at 2-1.

"There was a phase in which the game was open," Muller told Sky Sports Deutschland. "Then Ulle [Ulreich] was on the spot twice.

"He's been in great form and has often been dubbed Player of the Year, as he often keeps us in the game.

"He does things that are not part of the average goalkeeper's ABC, so you have to say thank you."

Coach Jupp Heynckes also highlighted Ulreich's importance, though he focused on what he felt was a "top" performance from the team.

"All in all, we brought a top performance against a good opponent," Heynckes told reporters.

"We were really motivated and focused on the game - we really wanted to go to Berlin. I think it was a footballing demonstration for a long time. My team is very experienced and clever, they are always capable of scoring a goal.

"We have done a great job, we were the dominant team, although Sven Ulreich saved us a couple of times."