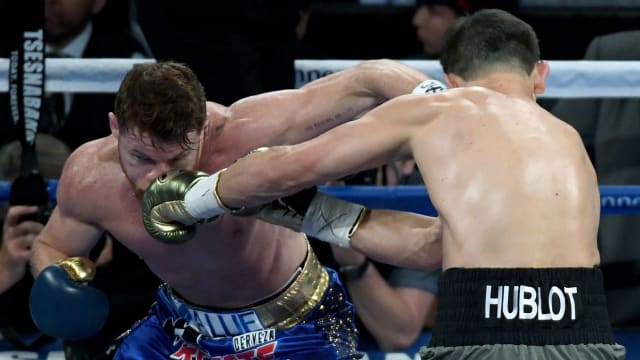 After Saul 'Canelo' Alvarez claimed his failed drugs tests were due to contaminated meat, Gennady Golovkin appears to have aimed a dig at his Mexican middleweight rival.

Last month, it was revealed Alvarez had returned positive samples, which showed trace levels of the banned substance clenbuterol - a revelation that has led to a much-anticipated Las Vegas rematch against Golovkin on May 5 being cancelled.

Alvarez was temporarily suspended by the Nevada State Athletic Commission following the results of the tests administered by the Voluntary Anti-Doping Agency (VADA) on February 17 and 20, but maintained his innocence and his camp blamed the adverse findings on eating tainted meat in the 27-year-old's homeland.

He and Golovkin had been due to fight again after their initial meeting last September ended in a controversial draw.

But the T-Mobile Arena showdown will no longer go ahead, with Alvarez withdrawing two weeks ago in light of his suspension and ahead of a scheduled hearing with the Nevada commission this Wednesday.

Golovkin posted a video to Twitter on Tuesday, seemingly poking fun at his rival.

The 40-second clip opens with Golovkin's trainer, Abel Sanchez, tucking into a steak and uttering the words: "Super-human power requires a special ingredient..." before a montage of the Kazakh working out and sparring in the gym.

Sanchez then finishes his sentence with "...It is called hard work," the video ending with a caption reading "NO DRAW", apparently in reference to their previous meeting, in which Golovkin was convinced he had prevailed.

After pulling out of the fight against unified world champion Golovkin, Alvarez insisted he was not guilty of any wrongdoing.

"I am truly shocked about what has happened and for those who have doubts and suspicions about my integrity I have always been and always will be [a] clean fighter," he said.

"I want to apologize to all my sponsors, the media and to everyone who is involved in the promotion of this event and especially to the fans. I respect this sport. I will always be a clean fighter."