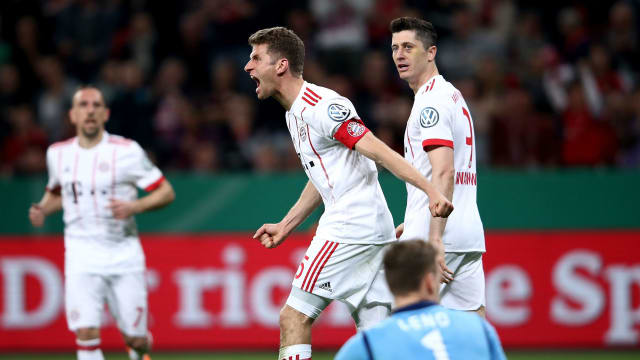 Thomas Muller-inspired Bayern Munich crushed Bayer Leverkusen 6-2 on Tuesday to book their place in the DFB-Pokal final in emphatic fashion, as the Bundesliga champions' treble hopes remain on course.

Heiko Herrlich's men initially produced a good response to falling two goals down early on, but Bayern ultimately blew Leverkusen away, with Muller scoring a hat-trick in a remarkably comfortable win at the BayArena.

Leverkusen looked as if they were going to be on the end of a hiding after just nine minutes, as Bayern wasted little time in going 2-0 up.

Lewandowski got both goals after a rapid start, but the home side were given a way back into the contest shortly after - Lars Bender taking full advantage.

Any encouragement for Leverkusen was quick snuffed out, however, as ruthless Bayern stepped up and brought the hammer down on their hosts, with Muller and Thiago Alcantara scoring within 15 minutes of the restart.

Muller got himself another in the 64th minute and, although Leon Bailey netted a stunning free-kick late on, things got uglier yet for Leverkusen as Bayern's captain completed his treble to book a final spot in ominous style.