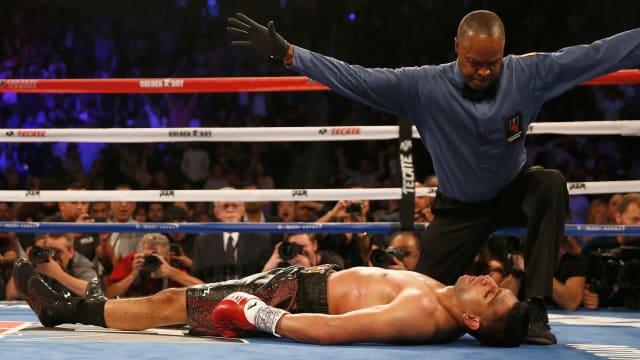 Amir Khan has no regrets over his defeat to Saul 'Canelo' Alvarez, a bout he claims he took because he was desperate for a super fight in Las Vegas.

Khan, a former unified light welterweight champion, jumped up two weight classes from welterweight to challenge Alvarez for the WBC middleweight title in Vegas in May 2016.

But his daunting task ended in defeat as he was knocked out in the sixth round by the Mexican, and the Briton has not fought since.

He will return to action at welterweight against Canadian Phil Lo Greco on Saturday, insisting the loss to Alvarez has left no lasting impact on him mentally.

"There's fights I've wanted, like for example the Floyd Mayweather fight - that was talked about for years and years, and didn't happen," Khan told Sky Sports on 'Amir Khan: Off Limits'.

"The Manny Pacquiao fight, which was talked about and didn't happen, so you do kind of fall out of love [with boxing].

"The reason I took the 'Canelo' fight is because I got quite desperate.

A true champion will fight through anything. pic.twitter.com/xyyoXfY74t

"I really wanted a big super fight and I wanted my name up on the Vegas strip. It's always been my dream.

"The Mayweather fight got so close many times, which never seemed to happen."

On the knockout, he added: "I've been knocked out before and I've come back from it, winning world titles.

"The mistake I made in there was my own fault. I dropped my left hand and I got caught over the top with Canelo's right hand.

"I would rather be knocked out with one big shot instead of taking numerous punches and getting stopped that way, so I'm glad it was just that one shot.

"Should I have taken that fight? Maybe not. It was a massive opportunity for me. I don't regret it, no.

"If I never took that fight I would have always thought 'what would have happened?' He beat me that night. He was the better fighter that night."