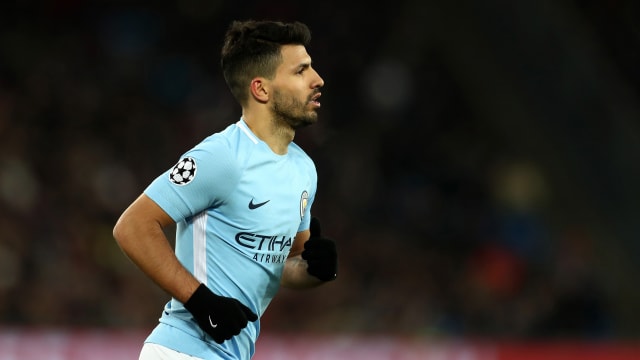 Sergio Aguero is relieved Manchester City were spared the drama of their 2011-12 title triumph in clinching the Premier League crown.

After City moved to the brink of glory with a 3-1 defeat of Tottenham at Wembley on Saturday, a shock 1-0 win for bottom side West Brom at Old Trafford meant rivals Manchester United could no longer catch Pep Guardiola's side.

EFL Cup winners City are crowned Premier League champions for the third time, with five games remaining and various records within their grasp.

But Aguero, scorer of the famous late goal against QPR that secured the trophy six years ago, is glad City have wrapped the league up with plenty of time to spare on this occasion.

"This is my third title with City and it's just a relief not to have to wait until the final day this time!" Aguero told the City website.

"This season has been incredible and the football we've played has been the best I've been involved with while at the club.

"It's been a pleasure to play with this team and be part of everything we've achieved this season.

"For players like David Silva, Vincent Kompany and Yaya [Toure] who have been here a long time, it's even more special because it's another title we've won together."

No team has been able to retain the Premier League since United in 2008-09, the year that ended a run of three consecutive titles for City's rivals under Alex Ferguson, and Aguero wants City to maintain their dominance in the coming years.

"We have scored great goals, played fantastic football and learned together under Pep," the Argentina star said.

"Now, the trick is making sure we kick on again next season and come back even stronger.

"We're looking forward to the celebrations, but first we have five important games to play and we want to win them all. Then we can think about the World Cup and next season.

"But for now, let's enjoy the moment together with our fans and finish strongly."