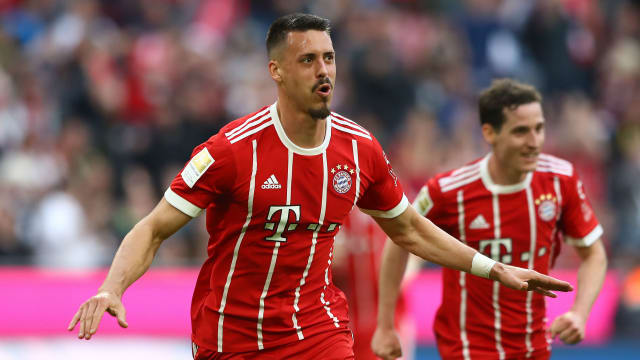 Sandro Wagner scored a quickfire double as a much-changed Bayern Munich came from behind to kick off Jupp Heynckes' farewell matches with a comfortable 5-1 Bundesliga victory over Borussia Monchengladbach.

Germany international Wagner proved a capable deputy for Robert Lewandowski, who dropped to the bench as one of seven alterations from the side that clinched a Champions League semi-final spot with a 0-0 draw against Sevilla on Wednesday, with two goals in the space of four first-half minutes.

It inspired Bayern to a 37th home league match without defeat in their first outing since it was announced Heynckes, who set a record by participating in his 1,034th Bundesliga match as a player or coach, would make way for Eintracht Frankfurt boss Niko Kovac from next season.

The Bavarian giants wrapped up a sixth successive top-flight crown with a 4-1 win at Augsburg last weekend but, although Heynckes said in his pre-match news conference they would not "ease off", they started slowly and were punished by Josip Drmic in the ninth minute.

Gladbach opted to play on the counter-attack thereafter and Wagner punished their reluctance to get forward with a pair of strikes, the second of which Yann Sommer should have done more to keep out.

Thiago Alcantara got the third before David Alaba marked his return from a back injury by scoring a Bundesliga goal with his weaker right foot for the first time, and Lewandowski - a 70th-minute replacement for Wagner - rounded off a resounding triumph that damages Gladbach's European aspirations.

Bayern started like a side with nothing to play for and they were punished for allowing Gladbach to control possession in the opening stages when Drmic cut inside Niklas Sule and curled a fine shot beyond Sven Ulreich and inside the far post.

Rather than push on, Gladbach sat back and enabled Bayern to build momentum, which proved costly.

After Corentin Tolisso warmed the gloves of Sommer from 20 yards, the hosts were level in the 37th minute.

A delightful dummy from Thiago let Sule's throughball run to Thomas Muller, who took Sommer out of the equation with a centre that Wagner tucked home first time.

The same duo combined for Wagner to get his second before the break, the striker towering over Matthias Ginter and producing a header that bounced underneath the outstretched arms of Sommer and into the bottom-left corner.

This game got turned on its head, aka Wagnered #FCBBMGpic.twitter.com/6Xc5dFHqa8

Wagner was denied a hat-trick by Sommer six minutes after the restart, but the rebound fell kindly for Thiago to extend Bayern's lead.

The hosts looked ready to run away with the match and only the post stopped James Rodriguez, a half-time replacement for Muller, from getting their fourth.

It came in the 67th minute, though. Alaba cut inside Thorgan Hazard and lashed a venomous effort beyond the idle Sommer with his unfavoured foot.

18 - The 18th #Bundesliga goal of @David_Alaba was his first with his right foot (after scoring the first 17 with his left foot). Rarity. @FCBayernEN#FCBBMG

Wagner made way for Lewandowski and the Poland international tucked Joshua Kimmich's cross past Sommer in the 82nd minute, but he scuffed a chance at the death that would have seen Bayern register six for the third successive Bundesliga home match.