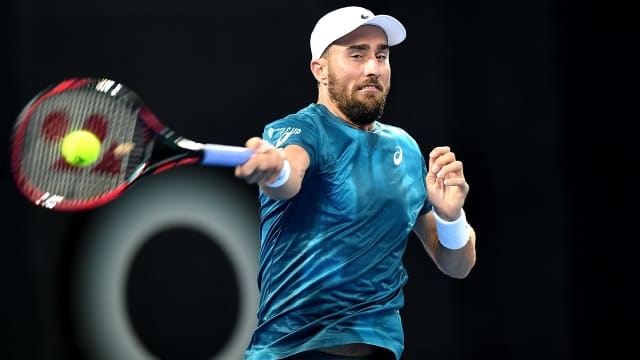 Steve Johnson's bid for back-to-back titles remains on track after outlasting top seed John Isner in the quarter-finals of the US Men's Clay Court Championships.

Isner became the fourth player in history to hit 10,000 aces after recording his 19th of the night but that was as good as it got for the big-serving American, who finished with 28 in total.

Johnson saved four of five break points and failed to convert any of his own in a three-set battle lasting more than two-and-a-half hours on clay.

With his 19th ace of the night (138 mph) against Steve Johnson @mensclaycourt, Isner becomes the fourth player in history to hit 10,000 aces.

Next up for titleholder Johnson is another American, this time Taylor Fritz in the semis.

Fritz overcame a 4-2 deficit in the final set as he rallied past 2015 champion Jack Sock 6-3 3-6 6-4 as he reached his maiden ATP World Tour semi-final on clay.

"I felt like it could really go either way. I just had to get back in it," Fritz said. "I just stayed with it and was able to come up [good] on the points that mattered."

Ivo Karlovic made history in his 3-6 6-2 6-3 victory over Australian fourth seed Nick Kyrgios.

Karlovic, 39, became the oldest player to advance to an ATP World Tour semi-final since Jimmy Connors in 1993.

The veteran Croatian will meet Tennys Sandgren in the final four after the eighth seed defeated Guido Pella 4-6 7-5 6-3.

Meanwhile, the Grand Prix Hassan II was rained off in Marrakech.