Dragons drown out Sharks as Storm return to winning ways 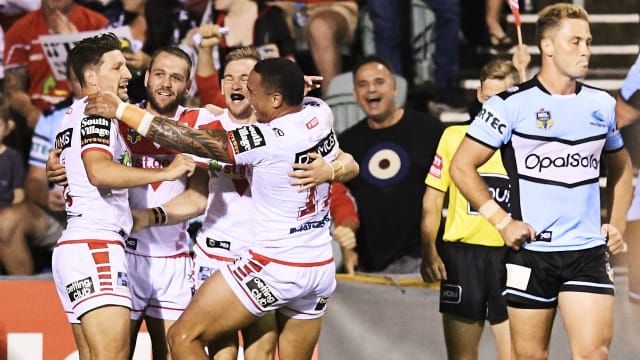 NRL pacesetters St George Illawarra Dragons reeled off a sixth successive win as they overcame an injury-hit Cronulla Sharks side 40-20 on Friday.

Matthew Dufty crossed twice and Gareth Widdop kicked 16 points, taking him beyond 800 for his NRL career, as the in-form Dragons maintained their 100 per cent record in the 2018 season.

However, while the final score suggested it was a comfortable victory, Cronulla overcame the departure of talismanic captain Paul Gallen, as well as fellow forwards Andrew Fifita and Wade Graham, to push their hosts.

Tries from Valentine Holmes and Ricky Leutele saw the Sharks cut the gap to 28-20 after the hour mark, only for the Dragons to move clear in the final quarter.

Dragons hold on to the Monty Porter Cup. 40-20 winners over the Sharks!#NRLDragonsSharks#redvpic.twitter.com/LH6G21blDX

Suliasi Vunivalu scored two of Melbourne's seven tries while captain Cameron Smith contributed 12 points with the boot, helping his side bounce back following defeats to Cronulla and Wests Tigers in the last two rounds.

Ken Sio touched down twice for Newcastle, yet the visitors never recovered from a slow start at AAMI Park as Melbourne crossed three times in the opening 15 minutes.