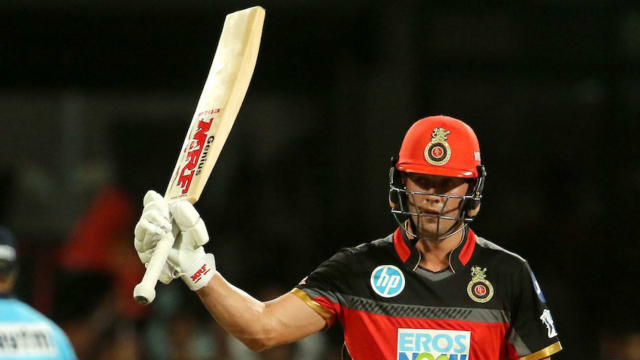 Royal Challengers Bangalore got off the mark in this year's Indian Premier League as AB de Villiers propelled them to a four-wicket win over Kings XI Punjab.

Having finished rock-bottom in 2017, RCB's new campaign started with a defeat at Kolkata Knight Riders, but two of their star-studded top four fired on Friday as the visitors' 155 all out was overhauled with three balls to spare.

KL Rahul - history maker for Kings XI last time out against Delhi Daredevils - made 47 from 30 balls and captain Ravichandran Ashwin added a useful 33 from 21 towards the end of the piece, but Umesh Yadav (3-23) was the star of the show for the hosts.

RCB's chase stuttered initially as Brendon McCullum fell to his first ball while skipper Virat Kohli could only make 21, but South African duo De Villiers and Quinton de Kock (45 off 34) resurrected the reply to the delight of a typically raucous M. Chinnaswamy Stadium.

In their season-opening victory on Sunday, Kings XI had been given a flying start by Rahul, who blasted his way to a fifty from just 14 balls - the fastest in IPL history.

A repeat looked on the cards when he took 16 from Chris Woakes' first over here and the visitors were 32-0 off three before Yadav struck a triple hammer blow.

Mayank Agarwal edged behind before Aaron Finch was dismissed lbw. After two dots, Yuvraj Singh swatted the fifth ball to the boundary but Yadav had the last laugh by ripping one through the left-hander's gate.

What a comeback from #RCB here at the Chinnaswamy Stadium courtesy one man - Umesh Yadav, who's been bowling like a dream.
KXIP - 50/3 after 6 overs. #PlayBold#RCBvKXIPpic.twitter.com/5d98pHhXRL

THE HONEYMOON'S OVER FOR FINCH

Finch missed the first game of the season to marry his fiancee, Amy, with the Daredevils' Glenn Maxwell standing as best man.

And Finch may wish he had extended his honeymoon after falling first ball to Yadav.

Given out on the field, Finch quickly reviewed the decision but replays showed the ball would have just clipped the top of leg stump by the finest of margins - a tough start to married life for the 31-year-old.

What an amazing day!  #grinchwedding

DESTRUCTIVE DE VILLIERS DIALS THE NUMBER OF THE BEAST

After Ashwin (2-30) removed De Kock and Sarfaraz Khan with successive balls in the 12th other, RCB were still 69 shy of their target and were forced to consolidate.

The equation was down to 34 from 3.2 overs when De Villiers took centre stage, launching three successive maximums from Mujeeb Ur Rahman before Mohit Sharma's slower ball was dispatched into the jubilant crowd at long-on to bring up his fifty.

De Villiers did fall in the next over, having hit two fours and four sixes in his 40-ball 57, but by that stage RCB needed less than a run a ball and got over the line with three to spare.