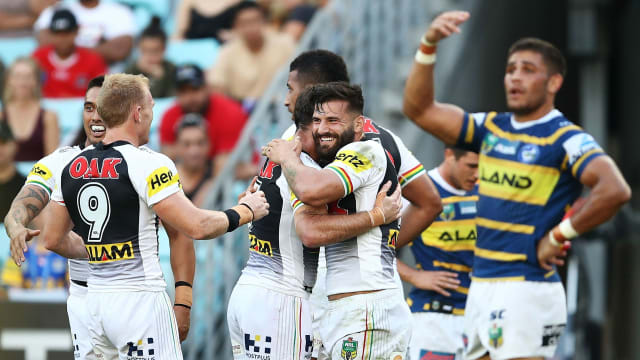 Parramatta Eels' wait for a first win of the NRL season goes on after they were beaten 12-6 by Penrith Panthers, while Gold Coast Titans got the better of Manly Sea Eagles on Sunday.

The presence of coach Brad Arthur on the touchline in the second half at ANZ Stadium failed to stop the rot as the Panthers moved up to third.

Josh Mansour scored the only try of the first half when James Maloney picked the winger out with a precise kick and he went over unchallenged.

Maloney's second penalty on the stroke of half-time gave Penrith a 10-0 advantage, but George Jennings capitalised on some sloppy defending to dot down and get the Eels on the board early in the second period.

Arthur's men were unable to avoid a fifth loss out of five and their worst start to a season since 1991, however, Maloney completing the scoring from the tee right at the end.

The Titans outscored Manly by five tries to three to win 32-20 at Marley Brown Oval.

Jai Arrow scored a try in each half to move the Titans up to sixth, Daly Cherry-Evans' 12-point haul proving to be in vain for the Sea Eagles.