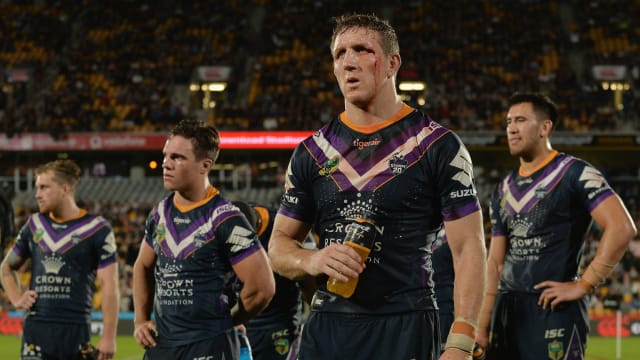 Chris Lawrence became Wests Tigers' leading all-time try-scorer as they did the double over Melbourne Storm with an 11-10 win before New Zealand Warriors maintained their 100 per cent record at the expense of North Queensland Cowboys in the double header at Mt Smart Stadium.

The Tigers spoiled Billy Slater's 300th game by causing an upset at AAMI Park last month and they ruined Craig Bellamy's 400th match on Saturday, Benji Marshall scoring the winning drop goal seven minutes from time with a crowd of 25,600 watching on.

Josh Addo-Carr gifted the Tigers the opening try when he flicked the ball back to keep it in play and Young Tonumaipea intercepted before setting up the onrushing Josh Aloiai, who powered his over.

The defending premiers hit back to lead 8-4 at half-time, Slater showing a sharp turn of foot to touch down and Brodie Croft, who opened the scoring with a penalty, adding the extras.

Croft was on target with another penalty, but Lawrence burst through a gap to dive over for a record 77th Tigers try, which Tuimoala Lolohea converted, and Marshall made it four wins out of five for Wests by nailing the decisive kick from 25 metres out.

Benji puts the @WestsTigers back in the lead!#NRLTigersStorm 11-10 with five minutes to go. #NRLpic.twitter.com/KBxy6yvjvk

The Warriors continued their perfect start to the season in the second match of the day in Auckland, David Fusitu'a scoring a first-half double in a 22-12 win over the Cowboys.

Stephen Kearney's men have now won five out of five - their best start to a campaign - after a dominant first-half display, Ken Maumalo going over before Fusitu'a crossed twice in the space of seven minutes.

Kyle Feldt's converted try late in the first half gave the Cowboys hope and Ben Hampton added another in the second half, but the fit-again Shaun Johnson took his tally for the night to 10 points with two penalties as the Warriors maintained their momentum.