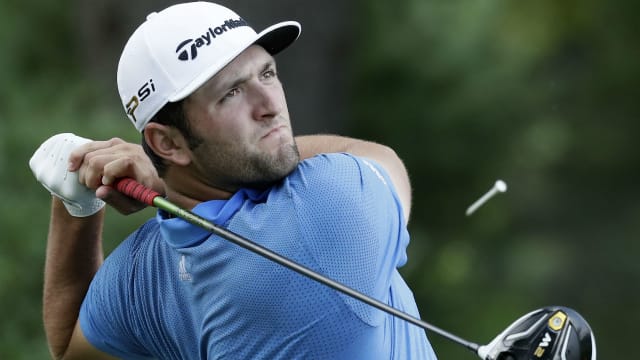 Jon Rahm is targeting a fast start on the front nine on Sunday as he attempts to chase down the Masters leaders after firing himself into contention in round three.

The Spaniard carded a seven-under-par 65, the joint-low score of the week matched by Rory McIlroy and Rickie Fowler on Saturday, which left him six shots adrift of leader Patrick Reed in fourth at Augusta.

Rahm has fought back from an opening-round 75 but recognises he still has plenty of work to do if he is to receive the green jack from compatriot Sergio Garcia on Sunday.

"There's a lot of ground to make up," Rahm said. "I feel like how I'm playing, I have to keep playing my game and I have to keep doing my thing, and hopefully I get another good start.

"If you can get a really good start on that front nine and post a good score again, that back nine can be extremely long for the leaders. We know what can happen on that back nine on Sunday."

Rahm's move started on a front nine that saw him birdie the first two holes and eagle the par-five eighth.

"To be able to make it two under par with birdie chances on almost every hole that I didn't make, especially one short one on seven, with three more par fives coming in, I could have a good finish like I did today."

Fowler, who, like Rahm, went bogey free, signed for a round that included five birdies and an eagle at the second, to leave him third - five back from Reed and two adrift of Rory McIlroy in second.

The American, one of the most talented players yet win a major, is ready to pounce on Sunday.

"Right now, it looks like we're five back," he said.

"It's definitely well within striking distance, especially at this place; anything can happen. Like I said, this tournament really gets going once you make the turn on Sunday.

"So, I still have to just go out and take care of my business and go play a solid front nine of golf tomorrow.  Like I said, we're ready to do that."