Heynckes sends thanks to predecessor Ancelotti after title win 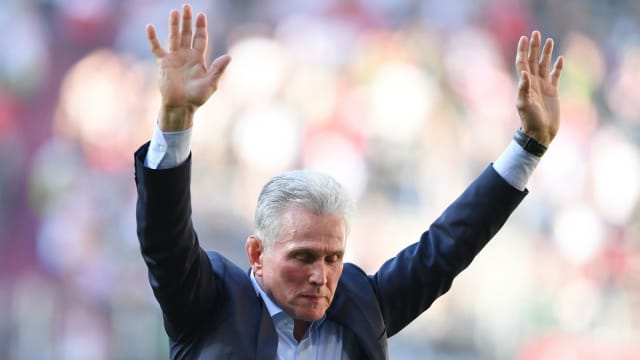 Bayern Munich coach Jupp Heynckes has sent his thanks to predecessor Carlo Ancelotti for his "involvement" this season after the Bavarian club sealed the Bundesliga title with a 4-1 win at Augsburg.

Ancelotti was sacked by Bayern at the end of September following a 3-0 Champions League defeat to Paris Saint-Germain.

The Italian reportedly lost the support of several key players, with Thomas Muller and Arjen Robben among those who spoke about against him in public.

Heynckes was ultimately installed as Ancelotti's replacement at the start of October and Bayern have not looked back since, with Saturday's comfortable win at Augsburg giving them a 20-point lead at the top and confirming a sixth successive Bundesliga title.

Let's all do the Conga!  #MiaSanMeisterpic.twitter.com/09dl7RjBT0

But Heynckes was eager to acknowledge Ancelotti's contribution to his side at the start of the campaign.

Speaking to Sky after the game, Heynckes said: "I'd like to send special greetings to Italy and Carlo Ancelotti for his involvement in this and congratulate him on this title.

"I think he's a great coach and a great person."