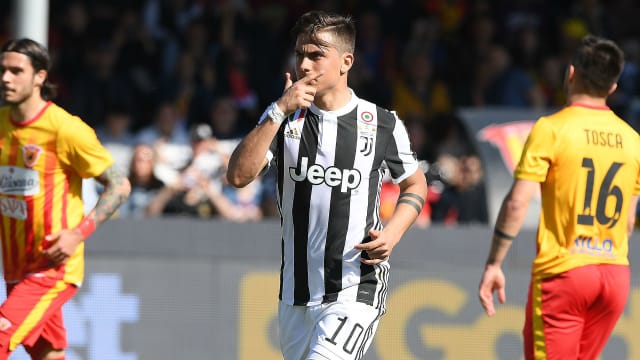 A Paulo Dybala-inspired Juventus bounced back from their midweek Champions League disappointment to grind out a 4-2 win over rock-bottom Benevento and open up a seven-point lead at the Serie A summit.

The Bianconeri suffered a humbling 3-0 defeat to Real Madrid on Tuesday, but edged past the league's bottom side to crank up the pressure on second-placed Napoli ahead of their clash with Chievo on Sunday.

Dybala, in particular, had a night to forget against Madrid after picking up a second-half red card that rules him out of next week's second leg.

The Argentinian - one of only two players to retain their place from that game - responded to that setback in style, though, as his third hat-trick of the season secured all three points for Massimiliano Allegri's side.

He scored twice - the second a penalty - either side of Cheick Diabate's leveller to give Juve a deserved half-time lead.

Diabate grabbed a second equaliser after 51 minutes, but Dybala spared any potential blushes by grabbing a second from the spot with 16 minutes to go before Douglas Costa added gloss to the scoreline with a stunning late goal.

The visitors scarcely had to get out of second gear to take a deserved lead after 16 minutes.

Juan Cuadrado cushioned a long ball into the path of Dybala on the edge of the penalty area and the Argentinian took one touch before whipping a sumptuous effort into Christian Puggioni's top right-hand corner.

Sandro then saw an angled drive well smothered by Wojciech Szczesny at the near post moments before Diabate netted an unlikely leveller.

Szczesny got down well to repel Filip Djuricic's low drive, but the loose ball was picked up by Guilherme and his low cross was diverted into the net by the Malian from close range.

Cuadrado should have restored Juve's advantage soon after, instead clipping wide with only the goalkeeper to beat, while Mario Mandzukic had a goal ruled out after appearing to use his hand in the build-up.

Dybala ensured the visitors did go into the interval ahead, though, with a clinical spot-kick, given after a VAR referral by referee Fabrizio Pasqua for Berat Djimsiti's clumsy foul on Miralem Pjanic.

Any thoughts that Juve were going to canter to victory in the second half were extinguished six minutes after the restart as Diabate rose highest to meet Nicolas Viola's corner with a thumping header into the far corner.

But home hopes of picking up a famous point were vanquished with 16 minutes remaining when Viola brought down substitute Gonzalo Higuain in the area, Dybala stroking in the resulting spot-kick to complete his treble.

Costa then took full advantage of Benevento's visible disappointment to whip in a wonderful fourth in the 82nd minute from 20 yards to wrap up all three points and banish their Champions League defeat to memory.