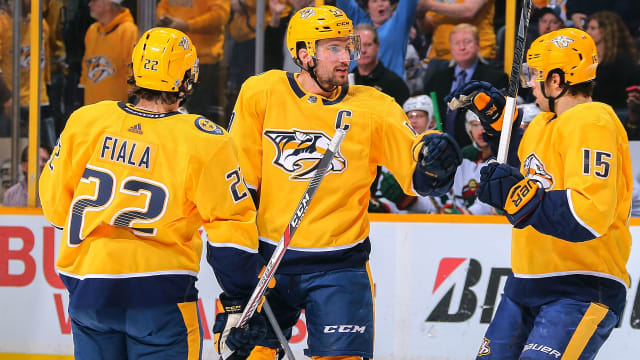 The Nashville Predators capped their impressive regular season run with a 4-3 win over the Washington Capitals to clinch first place in the NHL Central Division and the top seed in the Western Conference.

Thanks to a regulation loss by the Boston Bruins to the Florida Panthers on Thursday, the Predators (52-18-11) also secured the Presidents' Trophy for most points in the league.

It is also the first time in their history the Predators are Central Division and Western Conference regular-season champions in 19 seasons of existence.

The #Preds are Presidents' Trophy winners for the first time. @koorsenfire infographic: https://t.co/9JFOhsPq1t

They will have home ice advantage throughout the Stanley Cup playoffs.

The Capitals, 11-3-0 in their past 14 games, have clinched first place in the Metropolitan Division. Nashville's win also means the Winnipeg Jets will play the Minnesota Wild in the first round of the Stanley Cup playoffs.