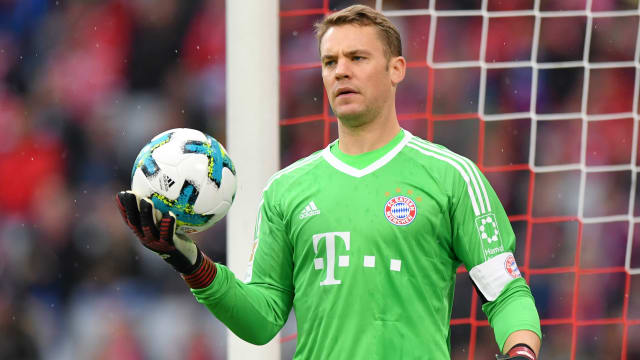 Bayern Munich goalkeeper Manuel Neuer has trained with a ball for the first time in over six months as he continues his recovery from a foot injury.

The Germany international completed a series of goalkeeping drills in a session at Bayern's Sabener Strasse training ground on Thursday.

The 32-year-old only resumed running outdoors last week, having been sidelined since the middle of September following surgery on a metatarsal problem.

"For the first time in more than six months, Manuel Neuer has completed a light session of dedicated goalkeeping training and confidently beat away shots at his goal," Bayern said via their official website.

"The FCB number one resumed running last Tuesday - and now he's back on the ball."

Sven Ulreich has deputised in Neuer's absence, but it is hoped the former Schalke star will return before the end of the Bundesliga season.

Jupp Heynckes' side face Augsburg on Saturday, knowing a win will be enough to secure the title.

For the first time in over half a year, @Manuel_Neuer completed a goalkeeper-specific training session today  #MiaSanMia#NeuerTheWallpic.twitter.com/c2IbSGePRz