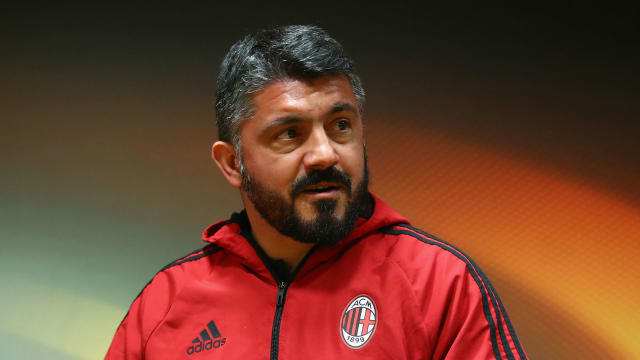 AC Milan's persistence with a formula that seemed destined to fail finally appears to have paid off.

The Rossoneri have struggled for stability since the sacking of Massimiliano Allegri in 2014, the last head coach to lead them to the Scudetto, with Gennaro Gattuso becoming their sixth different permanent boss in four years when he was appointed last November.

With the club seemingly unfazed by the disappointing tenures of three former players, ex-Milan midfielder Gattuso was promoted from his role with the youth team as the replacement for Vincenzo Montella.

The 40-year-old has gradually turned the Rossoneri's fortunes around and earned himself a three-year contract on Thursday, something that did not initially appear likely.

Gattuso's tenure began with an embarrassing 2-2 draw at bottom club Benevento, goalkeeper Alberto Brignoli heading home a stoppage-time equaliser to give the promoted club their first ever point in the division.

He eventually got them back on the right track, reignited a challenge for Europa League qualification and has justly been rewarded for proving a success where others floundered.

Mauro Tassotti oversaw a 3-1 Coppa Italia win over Spezia following the dismissal of Allegri, who was let go in January 2014 with Milan 11th in Serie A and a whopping 30 points behind leaders Juventus.

Tassotti's caretaker spell lasted just three days, with Seedorf, part of Allegri's 2010-11 side that claimed the Scudetto and a two-time Champions League winner during a 10-year spell in Milan's midfield, cutting short his time at Botafogo and hanging up his boots to fill the vacancy.

With Juve establishing a hegemony that still reigns in Italy, it was a move angled at restoring the club to its position as one of the perennial challengers for the title.

However, despite an upturn in form, the Dutchman was unable to stop Milan missing out on European qualification for the first time since 1997-98 and he was consequently let go at the conclusion of the campaign.

Like Gattuso, Inzaghi was a promotion from the youth team.

Some questionable transfer dealings that characterised the latter stages of the Silvio Berlusconi-Adriano Galliani era saw the likes of misfiring striker Fernando Torres and injury-prone midfielder Marco van Ginkel drafted in, while one of the last remaining figures of their illustrious recent history Kaka moved on to MLS.

Milan began the 2014-15 season with successive Serie A victories, but a lack of consistency resulted in them finishing 10th with a record of 13 wins, 13 draws and 12 losses - a return to European competition eluding them once more.

It was the Rossoneri's worst performance since they finished in the same position in 1997-98, and Inzaghi was axed after just one season at the helm.

Milan opted for a more experienced replacement by bringing former Inter defender Sinisa Mihajlovic in from Torino, but he too did not last long.

Mihajlovic was let go in April 2016 and Cristian Brocchi, who had been working with the academy, was handed the top job for the remainder of the season.

Brocchi won just two of the seven games he oversaw, which included an extra-time defeat to Juventus in the Coppa Italia final, as Milan finished seventh.

It was insufficient to secure him the position on a long-term basis, but, two years on, the Rossoneri may feel they are finally in safe hands following Gattuso's new deal.