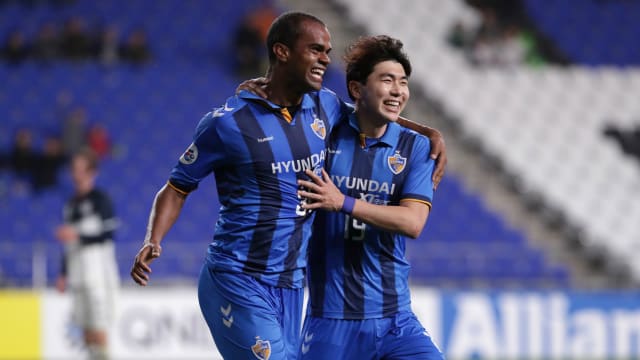 Ulsan emphatically ended Melbourne Victory's chances of escaping Group F with a 6-2 hammering of the Australian side in the AFC Champions League on Wednesday.

Junior Negao and Mislav Orsic struck doubles, while Lim Jong-eun and Kim Seung-jun were also on target to lead the 2012 winners into the knockout stages.

Substitute Kenny Athiu and New Zealand international Kosta Barbarouses grabbed late consolations for third-place Victory, who will be unable to leapfrog the K League 1 side in their final outing due to an inferior head-to-head record.

Ulsan will finish second behind Shanghai SIPG, who were held to a 1-1 home draw by Kawasaki Frontale after Elkeson's 68th-minute opener was cancelled out later by Kei Chinen's header.

Hulk blasted over a first-half penalty against his former employers, but the 31-year-old returned to tee up the goal that ultimately secured top spot.

Shanghai SIPG and @ulsanFC are through to the #ACL2018 Round of 16 after securing the top two spots in Group F! pic.twitter.com/MhwnSTCrGC

Tianjin Quanjian became the second Chinese Super League club to reach the last 16 courtesy of a late 1-0 win at Kitchee in Group E.

Anthony Modeste nodded the only goal in the 89th minute to sew up a top-two finish for Paolo Sousa's men, leaving Hong Kong-based Kitchee with just three points from five games.

The Japanese side needed a result to retain any hope of advancing, but goals from Ricardo Lopes and Lee Dong-gook either side of half-time sealed progression for group leaders Jeonbuk.

.@Jeonbuk_hyundai and Tianjin Quanjian seal the top 2 spots in Group E with one game to spare! #ACL2018pic.twitter.com/edbzIiHJ0d